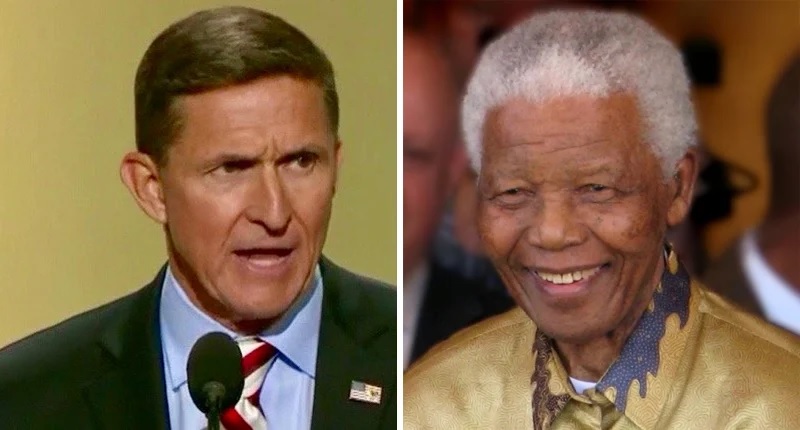 Days after Donald Trump compared himself to Abraham Lincoln, one of his top campaign advisors is comparing former National Security Advisor Michael Flynn to Nelson Mandela.

“With the Justice Department announcing Thursday that it would drop the case against Michael Flynn, officials close to President Donald Trump are already gaming out ways to bring the former national security adviser back onto the national political stage,” The Daily Beast reported Thursday. “Of the nine senior Trump administration officials, campaign staff, outside advisers, and longtime associates of the president reached on Thursday, all said that they wanted Flynn to assume some public-facing role in service of the president, including potentially as an official Trump surrogate Election Day inches closer.”

One of those who replied was John McLaughlin, one of President Trump’s chief pollsters.

“When Nelson Mandela came to America after years of political persecution he was treated like a rock star by Americans,” one of President Trump’s chief pollsters said. “Flynn is our rock star. A big difference is that he was persecuted in America.”https://t.co/5H1P4WByCB

Congresswoman Sheila Jackson Lee, a senior member of the House Committees on the Judiciary, Homeland Security and Budget, released this statement regarding the decision of the U.S. Attorney General William P. Barr to discontinue the United States’ prosecution of Michael E. Flynn, the president’s first National Security Advisor who pled guilty in federal court to lying federal investigators conducting a counterterrorism investigation into Russian interference in the 2016 presidential election:

“Today’s announcement confirms that U.S. Attorney General William P. Barr continues to view his role as the personal lawyer for the President rather than the chief law enforcement officer for the United States. Make no mistake, the action taken today is an attempt to relieve Michael Flynn of legal jeopardy without the President having to grant a pardon to a person who pled guilty to lying to federal investigators conducting a counterterrorism investigation into Russian interference in the 2016 presidential election. The President summoned former FBI Director James Comey to the White House on February 14, 2017 to request that the FBI “let [Flynn] go.” The request was refused by Director Comey who was subsequently fired by the President. The Attorney General apparently had no such reservations or scruples.

“The lies to FBI investigators by Michael Flynn were told in the course of a federal counterterrorism investigation into Russia’s role in interfering in our 2016 election, and whether that crime was aided and abetted by associates of the Trump Campaign. The meticulously document report submitted by Special Counsel Robert Mueller found that Trump Campaign members and associates materially impeded the Special Counsel’s investigation into Russian interference by lying about the nature of their Russian contacts, and by destroying evidence. Campaign associates also failed to inform law enforcement of outreach by Russian contacts.

“As documented in the report of the Special Counsel, the Russian government interfered in the 2016 presidential election in ‘sweeping and systematic fashion,’ through a social media campaign and by releasing stolen documents, for the purpose of securing the election of candidate Trump and inflicting significant damage to the candidacy of candidate Hillary Clinton. The Trump campaign welcomed the release of information illegally obtained by Russian hacking efforts.

“For its efforts on behalf of electing this President, it is reasonable to expect that Russia would expect reciprocation in the form of opposition to or lifting of sanctions imposed against it. What is not reasonable is that Michael Flynn, a former head of the Defense Intelligence Agency and the incoming National Security Advisor, would lie to federal investigators about his conversations with Russia’s Ambassador to the United States held in the days immediately following then President Barack Obama’s imposition of sanctions on Russia for its sweeping and systematic interference in the 2016 presidential election.

“Americans expect and deserve a legal system that pursues justice without fear or favor. Sadly, that expectation is betrayed by the unprecedented action today of the Attorney General. I look forward to vigorously questioning Attorney General Barr on this and other actions he has taken that undermine the rule of law at his next appearance before the House Committee on the Judiciary.”