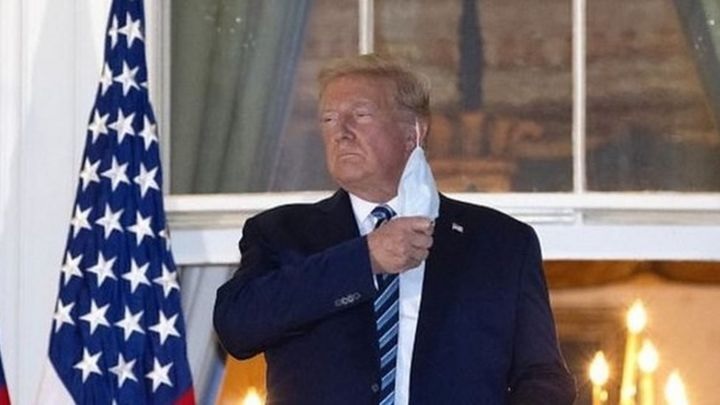 After returning to the White House after his convalescence battling the coronavirus at Walter Reed National Military Medical Center, President Donald Trump issued a video statement on his health.

Trump says that he has “learned so much” about the virus by contracting it. He even implied that he may be “immune” to the virus.

Pres. Trump arrived back at the White House, and removed his mask, following several nights at Walter Reed Medical Center. The president left Walter Reed on Monday evening despite not having completed his full COVID-19 treatment. https://t.co/yjvZFDyiDK pic.twitter.com/SqdJuFbK7h

Supporters of the president have touted his “miraculous” recovery from the deadly virus that has killed more than 209,000 Americans. Trump was treated by a team of extraordinary doctors and received an experimental drug that is not readily available to the average American.

He was treated intravenously with remdesivir and a steroid called dexamethasone which can cause agitation, anxiety and mood swings. Even after his return, Trump will get another dose of remdesivir via I.V. at the medical suite in the White House.

His doctor, Sean Conley, said Monday the president is “still not out of the woods.”

But Trump told his followers that they have little to fear from the virus.

The pushback to Trump’s statements was immediate. CNN political analyst, David Gergen, told Wolf Blitzer that Trump is “clearly doubling down on the worst mistake of his presidency.”

“I think he is going to get a lot of people killed as a result,” Gergen said.

Upon arriving back to the White House on Monday night, Trump took off his mask in the presence of reporters and staff while still contagious with coronavirus.

Reflecting public reaction to his actions in the week since his diagnosis was announced, polls show that 69% of people believe that Trump handled his infection irresponsibly.

In response to Trump’s statements, Democratic presidential hopeful Joe Biden said he hopes “that the president, having gone through what he went through – and I’m glad he seems to be coming along pretty well – would communicate the right lesson to the American people: Masks matter.”

“These masks, they matter,” Biden added. “It matters, it saves lives. It prevents the spread of the disease.”