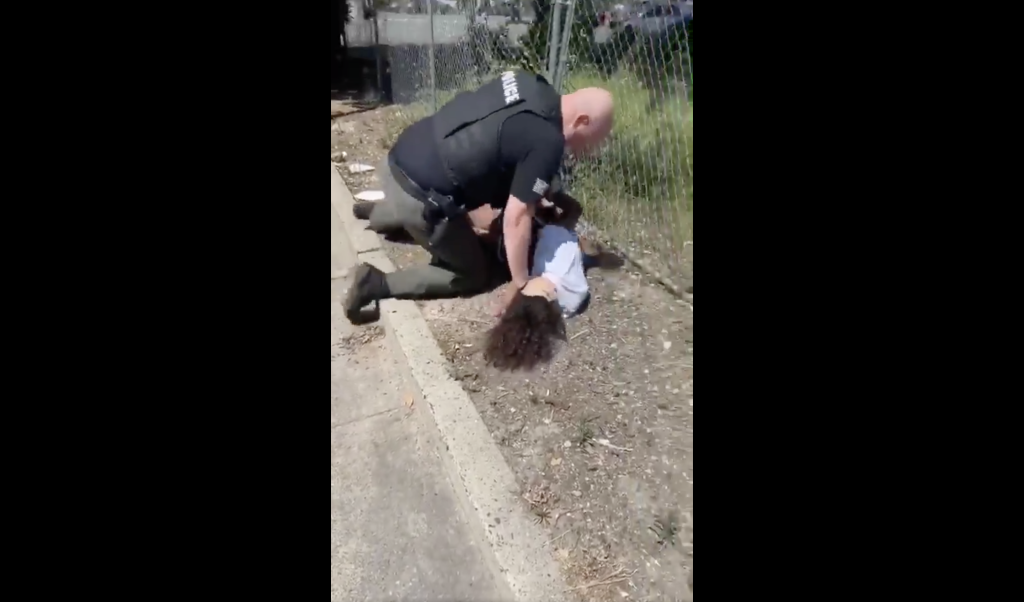 The police department at the center of a viral video showing an officer assaulting a young teenage boy in California is defending the action as a reasonable response to a situation that a spokesperson repeatedly called “the facts as we understand them.” Rancho Cordova Police Department’s statement released Tuesday afternoon said the boy seen on the video claimed to be an adult and thus was suspected of criminal activity after an officer “lost sight” of a man who was apparently the primary and initial suspect.

Cell phone video shows a police officer in Rancho Cordova, California, slamming a 14-year-old child’s face and body into the pavement, then punching him in the head repeatedly, after accusing him of smoking marijuana, yesterday.pic.twitter.com/LSzjXW9DPI

There was no word on the teen’s physical condition.

The statement only identified the police officer seen on the video as “a Problem Oriented Policing (POP) Officer with the Rancho Cordova Police Department.”

The statement follows in full:

“On April 27, 2020, a Problem Oriented Policing (POP) Officer with the Rancho Cordova Police Department was proactively patrolling the area of Mills Station Road and Mather Field Road. The deputy was in the area due to complaints from citizens about hand-to-hand sales of alcohol, tobacco and drugs to minors.

“It’s important to put video footage into context, especially in relation to a use of force incident. In this case, the deputy saw what he believed to be a hand-to-hand exchange between an adult and juvenile. As the deputy turned around, he lost sight of the adult, who left the area. When the deputy approached the juvenile, the juvenile was uncooperative and refused to give the deputy basic identifying information. He told the deputy he was 18 years old. Having reasonable suspicion that criminal activity was occurring, the deputy attempted to detain the juvenile so he could conduct further investigation. The juvenile became physically resistive at that time, causing the deputy to lose control of his handcuffs, which landed several feet away. The deputy attempted to maintain control of the juvenile without his handcuffs and while alone waiting for his partners to arrive and assist him.

“Ultimately, the deputy recovered tobacco products from the 14-year-old juvenile, which is presumably the reason for his resistance. The juvenile was cited and released to his guardians.

“This type of situation is hard on everyone–the young man, who resisted arrest, and the officer, who would much rather have him cooperate. The community should know our deputies have a heart for the Rancho Cordova community, especially for the youth they serve through the schools, PAL sports, and our new Youth Center.

A video showing a police officer beating an unarmed young Black male was going viral on Tuesday in what appeared to be the latest instance of police brutality in California. The footage, apparently filmed by a bystander in the town of Rancho Cordova, captured the unidentified white officer on the ground struggling with a reported teenager and unsuccessfully trying to handcuff him.

The video was posted to Twitter on Monday — the day it reportedly happened — with the tweet claiming that it showed an officer with the Rancho Cordova Police Department (RCPD) brutally beating the boy over a cigar. The officer sat on top of the boy, punched him and maneuvered his arm in a painful motion that looked like it might break.

“RCPD brutally tackled and hit my best friend’s 14 year old brother today over a swisher sweet!” the tweet said. “The officer had no reason to brutalize and traumatize this boy like this! He has a pre existing health condition which could be fatal under this kind of stress! Unjustifiable!”

RCPD brutally tackled and hit my best friend’s 14 year old brother today over a swisher sweet! The officer had no reason to brutalize and traumatize this boy like this! He has a pre existing health condition which could be fatal under this kind of stress! Unjustifiable! pic.twitter.com/94fqyu3J28

While Swisher Sweets cigars are popularly hollowed out to use the leaves to roll marijuana, there was neither any reference to weed in the tweet nor during the video.

The 15-second clip may not have been long enough for some viewers to fully grasp the context to the encounter, but even if it was over a “Swisher Sweet” it should be noted that recreational marijuana is legal in California. Granted, the minimum age for people to consume marijuana in California is older than the reported age of the victim on the video. However, police training — in theory and rarely in practice — should have properly prepared officers to handle minors no matter what the offense, but especially if the alleged crime was a non-violent one like marijuana use.

Notably, the officer from the police department in suburban Sacramento wasn’t wearing any personal protective equipment like a face mask and gloves to guard both himself and anyone else against possibly contracting the coronavirus, the highly contagious respiratory disease ravaging America that has hit northern California especially hard. In particular, the health aspect of the brutality cannot be understated since the coronavirus preys upon those with underlying health conditions and has disproportionately affected Black people. That combination put the teenager being beaten by the officer at an increased risk since police departments have also been heavily impacted by the disease.

Because of the COVID-19 pandemic, a rising number of cities have begun ordering their police departments to either delay arrests for nonviolent offenses or stop them altogether. In that respect, the response by the police officer in Rancho Cordova appeared to be egregious at worst and criminal at best. According to RCPD’s website, crime statistics for the city have been trending down all year. While seemingly every crime from murder to robbery to arson is listed on the site, conspicuously missing is any reference to marijuana. Of course, that’s probably because, as mentioned earlier, marijuana is fully legal in the state of California.

A report last week from the Sacramento Bee said that the Sacramento County Sheriff’s Office, which also operates RCPD, “would step up enforcement of the state and county orders to stay at home, and begin charging ‘blatant’ violators with misdemeanors that carry a penalty of a fine or possible jail time.”