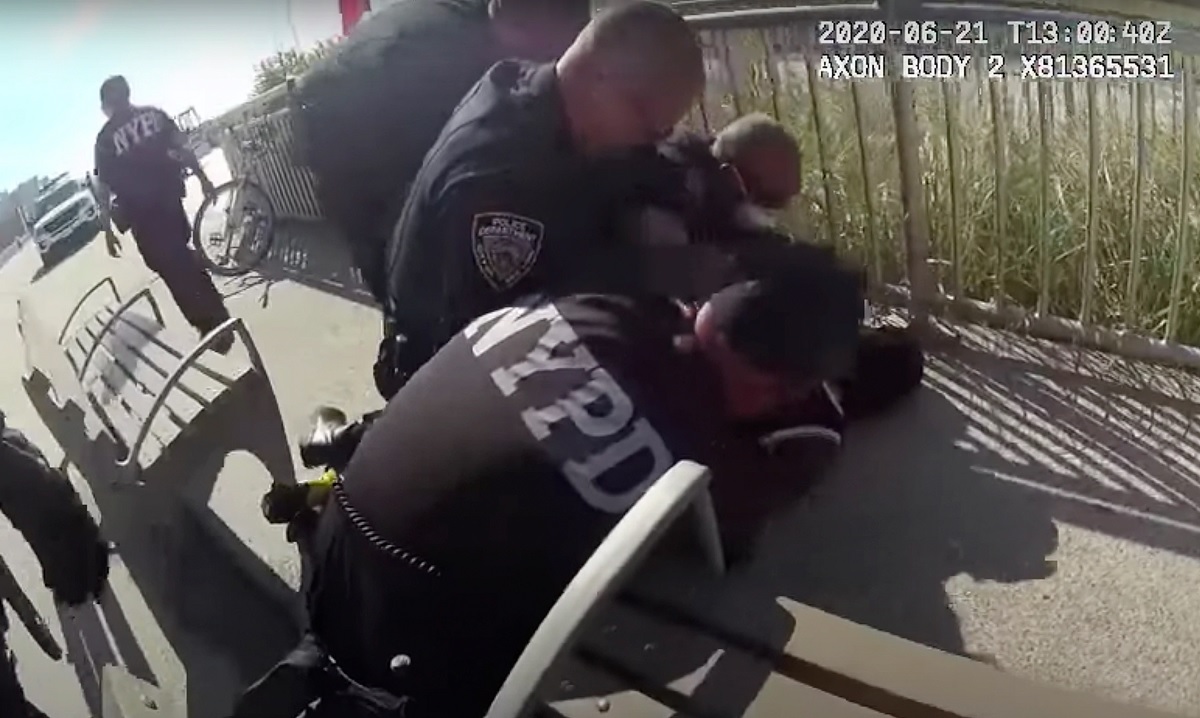 An NYPD police officer was caught on camera using a chokehold on a Black man just weeks after New York City banned the use of chokeholds by cops.

According to Spectrum News NY1, an investigation is underway after the incident was recorded on Sunday and eventually went viral on social media.

In the graphic clip, the eyewitness in the video can be heard yelling, “He’s out, he’s out, he’s out. Look, look, officer!” The incident occurred in Rockaway Park, Queens, according to bystanders who recorded the video.

By the end of the video the man, identified as Ricky Bellevue, appears to be non-respondent, but cops said the man is alive. According to them, the whole incident escalated simply because the man threw a bottle at an officer.

Police body camera footage was released, which shows three men acting somewhat belligerently toward officers. This is when a group of cops arrests Bellevue.

Bellevue’s attorney says he was seen kicking a bottle on the boardwalk and was told by cops that he was being charged with disorderly conduct. His attorney says the chokehold left Bellevue roughed up and the action was an example of using excessive force.

“Well, physically he’s not doing great,” the attorney explained. “Police officers are saying he has a laceration, that’s in their statement. But it’s more than a laceration. It’s a huge circle, sort of, on the back of his head where they clearly dragged him along the concrete or something. Because it took all of his hair off and all of his skin off.”

By 7 p.m. on Sunday, the Police Commissioner Dermot Shea announced that the cop involved in the incident was suspended without pay.

The incident occurred just as protests continue to erupt across the country over police violence. George Floyd was just one example of a Black person who died after an encounter with the police. Officer Derek Chauvin was caught on camera in Minneapolis kneeling on Floyd’s neck while Floyd yelled, “I can’t breathe.” Chauvin has since been fired from the police department and he’s charged with second degree murder.

Protestors have been making demands ranging from police reform to defunding police departments in city budgets. New York Gov. Andrew Cuomo signed a new state law banning police chokeholds in early June, meaning cops can now be criminally charged for using it. The law was named after Eric Garner, who died in 2014 after fired officer Daniel Pantaleo used a chokehold on him in Statin Island.

New York City Council also passed a series of police reform bills, including making the chokeholds a crime. Mayor Bill de Blasio is supposed to be signing off on the bill. He also said that he would cut funds from NYPD and shift the money to youth and social service programs. NYPD currently has an annual budget of $6 billion, which is more than 6 percent of de Blasio’s proposed fiscal 2021 budget, according to The New York Times.

The NYPD released a statement about the Queens incident, saying:

“We are aware of the video and there is an active use of force investigation underway by the Internal Affairs Bureau. This matter is taken extremely seriously and we expect to have an update this evening as the investigation unfolds.” The Queens Legal Defense Fund said they would take on representing Bellevue.

“Officer Afanador, Badge # 31730 of the @NYPD100Pct @NYPDnews at Far Rockaway Beach performing an Illegal modern day lynching chokehold on a Black Man until he was unconscious. I demand his immediate firing & criminal charges for breaking the city & state ban. #DefundThePolice.”

Officer Afanador, Badge # 31730 of the @NYPD100Pct @NYPDnews at Far Rockaway Beach performing an Illegal modern day lynching chokehold on a Black Man until he was unconscious. I demand his immediate firing & criminal charges for breaking the city & state ban. #DefundThePolice pic.twitter.com/wtAmYWxIbE