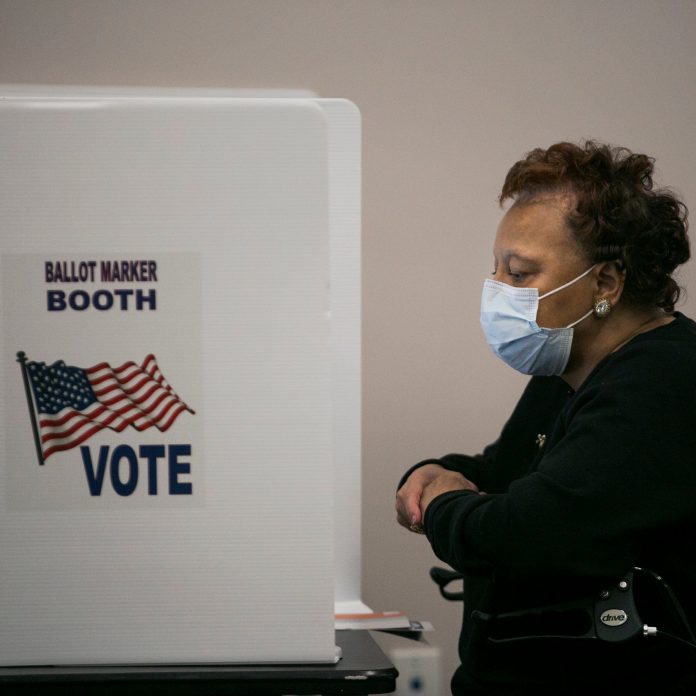 Voters in three states will head to the polls on Tuesday amid a coronavirus health crisis that has led other states to postpone their elections.

The primaries in Arizona, Florida and Illinois will continue as planned, as state officials say they’ve taken the necessary precautions to ensure that voters can safely cast ballots.

The fate of Ohio’s primary was settled late Monday when Gov. Mike DeWine (R) announced his administration would order all polling locations to be closed due to a health emergency, capping a day of mixed messages and confusion.

State officials in Ohio filed a last-minute legal injunction seeking to delay in-person voting until June 2, but a judge refused to honor the request on Monday, saying it would set a “terrible” precedent.

DeWine then said Dr. Amy Action, director of the Ohio Department of Health, would issue an order blocking the election, allowing Secretary of State Frank LaRose time to seek a remedy through the courts to extend voting options to Ohio residents.

The Centers for Disease Control and Prevention (CDC) issued guidance this weekend saying that people should avoid gatherings of 50 people or more, raising questions about the safety of opening polling places, where hundreds will gather indoors and stand in line to cast ballots.

DeWine, a Republican, said couldn’t justify holding the election because it would not conform to CDC guidelines.

“During this time when we face an unprecedented public health crisis, to conduct an election tomorrow would force poll workers and voters to place themselves at an unacceptable health risk of contracting coronavirus,” he said.

Primary elections scheduled for later this spring have already been postponed in Georgia, Louisiana and Puerto Rico over concerns about the spread of the virus.

The four Tuesday contests come as former Vice President Joe Biden has opened up a substantial lead in the delegate race over Sen. Bernie Sanders (I-Vt.). Biden is widely expected to grow that lead on Tuesday, with new polls showing him ahead by huge margins nationally and in the states set to vote.

Biden and Sanders have differed on whether the Tuesday elections should go forward as planned. Many on the left are agitating for the elections to be delayed, and Sanders echoed their concerns in an interview with Anderson Cooper following Sunday night’s debate.

“I would hope the governors listen to the public health experts and they’re saying…we don’t want gatherings of 50 or more people,” Sanders said. “And when I think about some of the elderly people sitting behind the desks, registering people and all that, does that make a lot of sense? I’m not sure that it does.”

The Biden campaign, however, struck a different tone, saying that the state leaders know best and would have postponed the elections if they represented a public health threat.

“The right to vote is the most sacred American right there is,” Biden said over Twitter. “State election officials are working closely with public health officials to hold safe elections. If you are feeling healthy, not showing symptoms, and not at risk of being exposed to COVID-19, please vote on Tuesday.”

Biden’s statement was criticized by some, who noted that even those who are not showing symptoms can spread the virus and that everyone is at risk of exposure.

The Biden campaign did not respond to a request for comment.

The virus is particularly deadly for the elderly, and Florida has a large population of older voters.

State officials in Illinois, which will also vote on Tuesday, have been among the most aggressive in the country in addressing the pandemic, ordering the closure of restaurants and bars in an effort to contain the spread.

“We understand that this election presents voters with the difficult task of weighing civic duty with the safety of themselves and others,” Dietrich said. “We believe that by following guidance from our state and federal health professionals, voters can vote safely at early voting sites today and at polling places tomorrow.”

Election officials have been sanitizing polling places and moving the locations outside of nursing homes. They’ve been encouraging people to vote early or to mail in ballots ahead of time, or to arrive at off-peak hours to avoid long lines or big crowds.

President Trump said that he didn’t believe postponing the elections is necessary.

But there could be unforeseen snags in the voting process, even if voters feel they can safely go out in public.

The Florida Democratic Party has criticized Gov. Ron DeSantis, a Republican, saying his administration has been too slow in providing updated lists of polling site closures and changes.

Florida Democratic Party Executive Director Juan Peñalosa said the party had identified more than 126,000 voters whose precincts may not know that their polling place has been closed or relocated.

“Florida Democrats understand the confluence of events that led to the closures just days before our election,” Peñalosa said. “We want to be good partners and help get the word out, but we need the State Department of Elections and the Governor to uphold their responsibility to our Democracy and release information of polling site re-locations so that the Florida Democratic Party, our 100+ staff and thousands of volunteers can help communicate these changes to voters.”

Biden leads Sanders by about 140 delegates. That lead is expected to grow substantially on Tuesday if the elections in Florida and other states fits with the polls.

The former vice president has double-digit leads in polls of all three states holding Tuesday contests. In Florida, where the most delegates are at stake, Biden leads Sanders by between 29 and 56 points in polls released over the past few days.

The Democratic debate on Sunday night focused heavily on how the candidates would respond to the coronavirus, but there was nothing to indicate that the shape of the race had been dramatically altered.

“It’s a crazy world so who knows what happens on Tuesday, whether people vote or even if suddenly those primaries are postponed … But I do not think this debate dramatically shifted the trajectory of the campaign,” said Jonathan Tasini, a progressive strategist who supports Sanders. “For now.”