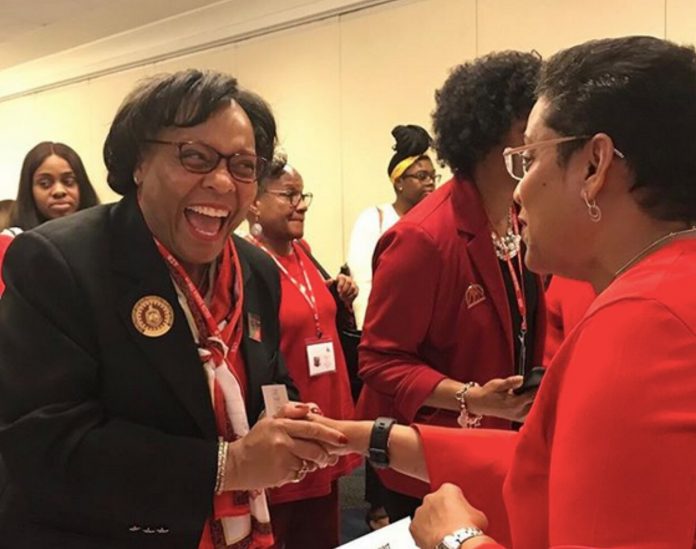 Members of Delta Sigma Theta Sorority, Inc. took to Capitol Hill on Tuesday in droves, meeting with congressional leaders and staffers and pushing legislation important to the Black community.

Decked out in red, the Deltas went door-to-door addressing lawmakers on 10 legislative proposals the sorority backs, including voting rights, outlawing hair discrimination based on texture or style, and overhauling the criminal justice system.

“A lot of these issues affect our community, and they are currently sitting still on (Senate Majority Leader Mitch) McConnell’s desk,” Ashley Stepps of North Little Rock, Arkansas told CNN.

Stepps called on her senator, Republican Tom Cotton of Arkansas, to help push legislation important to Black people. Members of Cotton’s staff met with some of the Deltas, according to CNN, but it is unclear if Cotton now backs any of the legislation the sorority supports.

Meanwhile, Sarahjini Nunn Spencer, the Midwest Regional Director of the Deltas, went directly to McConnell’s office, along with about 50 of her sorors.

“Senator McConnell plays a vital role in getting issues passed within the Senate, and his effect is far-reaching, so we thought that it was important to come collectively, representing various states to let them know that we are here,” Nunn Spencer told CNN.

“We are watching. And we need him to represent us as well.”

Nunn Spencer pointed out the increasingly significant role Black women play in elections and said issues important to the demographic are wide-ranging and may change from year to year.

“We worry about Russia, playing a part in these elections. We’re also interested in voters’ rights issues which we know is a state issue, but we also need them to recognize that he’s very powerful on the state level, too, and can lead that charge as well,” Nunn Spencer explained.

Kyesha Williams, 22, from the University of Arkansas, said an issue important to her is the student loan crisis.

“A lot of students come to school but they don’t have the funds. I know a lot of those leave in debt … So we’re kind of trying to make sure that we aren’t stuck, so far in debt after graduation,” she told CNN.

Other issues sorority members lobbied in support of were gun reform, decriminalizing marijuana and pushing colleges to report hazing incidents.