DefenderNetwork.com
Home NEWS National ‘You Have No Authority Over Me’: White man screams in face of... 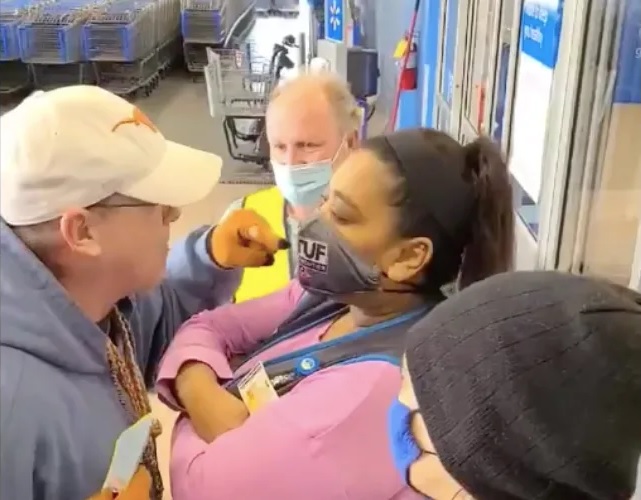 A man was caught on video yelling and pointing in workers’ faces during a meltdown at a Walmart store in Alaska.

The incident happened at a Walmart in Anchorage on Thursday, a representative for Walmart told McClatchy News.

Video posted to Twitter Saturday shows a man without a mask walking quickly toward a Walmart exit before turning around and pointing at a worker, telling her to “get back on your highway to hell and get out of a godly man’s face.”

The video has been viewed more than 5 million times as of Sunday. It’s been shared more than 12,000 times.

Anti-masker in Alaska gets kicked out of Walmart & has a public meltdown pic.twitter.com/wymrh10XZk

In the video, someone can be heard saying “have a good day” as the man approaches the door. He then turns around and addresses workers behind him, calling them “blind and ignorant” and unable to “come up with you own f—— ideas,” the video shows.

Workers can be heard asking the man to leave as he, again, starts for the door before turning around and pointing in workers’ faces saying that they “have not established authority” to ask him to leave.

When he tells them to get a manager, a woman responds that four members of management are present.

“Are you exercising your rights as a private company to take away my rights… you can say you can refuse service, are you refusing my service?” he yells.

The workers exchange more words with the man before he starts to head out the door, the video shows. As he passes through the first set of doors, he turns around and flips off a worker, saying, “Please return to your service of Satan in your ignorant belief you are right.”

One worker follows the man as he walks out the door before he turns around again, the video shows. He flips off the worker a second time before pointing in her face, saying, “Please in the future, respect my rights… you will never f—— get my six-foot space…”

He then gets in the worker’s face as she stands with her arms crossed. The man asks if the worker is going to stop him.

The worker he is focusing his nasty hot air on just coolly responds to him to have a good day, while two of her male co-workers stand to the side until another person behind the camera finally tells him to get out of their faces.

He continues, saying that he has the “right to life, liberty and the pursuit of happiness” and that his “happiness is best served by standing in your face and saying you’re a fool and wrong and you have no authority over me,” the video shows.

The last few seconds of the video show him yelling at the person recording the incident, saying that she threatened him.

A longer video of the incident posted to Instagram ends with the man telling workers that they “aren’t even human” before he storms out the door and into the parking lot.

In a statement to McClatchy News, Walmart said: “It’s unfortunate that this individual chose to express their displeasure in such an inappropriate manner, but we’re proud our associates displayed patience and professionalism as they navigated this challenging situation.”

The man’s name has not be released.