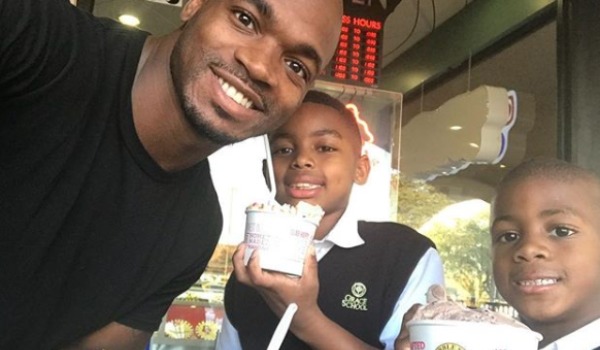 Adrian Peterson might be regretting an interview he gave to Bleacher Report, where he admitted to still beating his son with a thin, bendable tree branch often called a “switch.”

In 2014 the NFL star was charged with child abuse after he used a switch on his child, and a doctor who later saw the marks called the authorities.

At the time, Peterson was playing for the Minnesota Vikings and was suspended until the courts reached a final decision.

He later accepted a plea deal but didn’t return to the team until the following season. Peterson also said he’d never use a switch again and felt horrible that he left marks on his boy.

Eventually, the star running back was traded to the New Orleans Saints, then the Arizona Cardinals and was eventually picked up by the Washington Redskins, where’s he’s had a very successful season.

Not only that, it seemed like he moved beyond the public scrutiny that came with the abuse charges, but he’s now getting blasted again for admitting to still using a switch on occasion.

Peterson also talked about the 2014 abuse charge and seemed to defend using a switch, because he said his child is tough and didn’t flinch during the beating.

“My kids are different,” Peterson explained. “They have my blood in them. They have my genes in them. It’s crazy when you think about it. But for me it’s not. I know my kids. I know what they’re capable of, and I know the types of things they do.”

Peterson — who said he uses other forms of discipline besides hitting, also revealed that he had to spank his son recently.

“I had to discipline my son and spank him the other day with a belt,” he stated. “There’s different ways I discipline my kids. I didn’t let that change me.”

After the interview surfaced, many came down on Peterson for his words and some threatened violence.

“Maybe you should stop hitting your children you pathetic piece of sh–,” one person wrote.

“I wish to meet you and give you some punishments,” wrote another.

But others defended the 33-year-old and told his critics to mind their own business.

“My dad spanked me with a belt. I love him more than anything,” one guy commented. “All you f—— dumb f—s telling someone how to raise their own kid.”

“Shut up,” someone else wrote. “That incident was years ago and it was between him and his own child.”

Peterson’s agent commented on the interview as well and said the reporter who conducted it violated the football player’s trust.