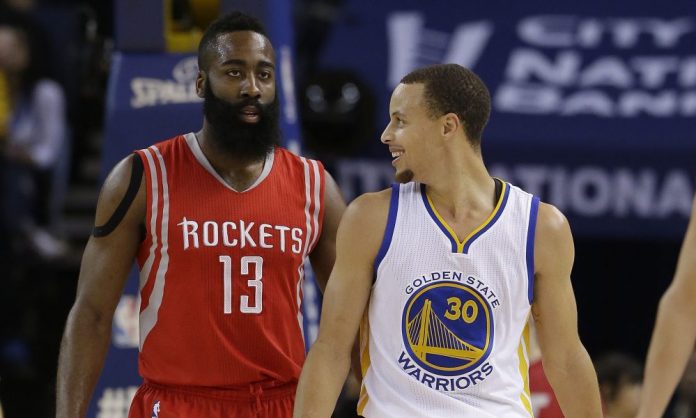 Stephen Curry shook, shimmied and screamed, letting his adoring fans and the Rockets know that Oracle Arena was his house.

Once the two-time MVP got his groove back, Houston was helpless.

Curry scored 35 points with five 3-pointers, shooting over James Harden and driving past him as the Golden State Warriors made a second-half statement to beat the Rockets 126-85 on Sunday night for a 2-1 lead in the Western Conference finals.

Curry had 18 points on 7-for-7 shooting in the third quarter, lying with his back flat on the court for his unique version of a snow angel and even following one basket with an expletive, shouting “This is my … house!” to the thousands who cheered and exhaled, exhilarated by his every move and rumble.

“There’s obviously that anticipation when you come in transition and you find an open look and there’s a collective hush in the crowd, especially in this building,” Curry said. “It’s a cool moment. I was searching for it in the first half. I had plenty of opportunities, I just couldn’t knock it down. Third quarter it opened up. I’ve been doing it for a while. I won’t let two tough games shooting keep me frustrated.”

The 41-point victory was the largest in franchise history during the postseason, topping a 39-point win — 85-46 — by the Philadelphia Warriors against the St. Louis Bombers on April 6, 1948.

Kevin Durant added 25 points, six rebounds and six assists, while Draymond Green grabbed 17 rebounds to go with 10 points and six assists. The Warriors won an NBA-record 16th consecutive home postseason game, surpassing the Chicago Bulls’ mark of 15 in a row from April 27, 1990-May 21, 1991.

“We’re in the middle of a hell of a run, obviously,” coach Steve Kerr said.

The defending champions got defensive — and maybe a little mad — after a 127-105 Game 2 defeat Wednesday night at Houston, determined to make stops to ignite the transition game and open up 3-point shooters.

Especially Curry, who snapped out of his slump with four in the second half.

“I’ve seen those explosions happen everywhere, not just here,” Green said. “His 3 is similar to some people’s dunk. You go to certain arenas and a guy gets a dunk it’s just absurd. That’s how his 3 ball is. … Don’t mean to disappoint, but I’ve seen crazier from him.”

Harden had 20 points and nine assists, while Chris Paul added 13 points and 10 rebounds as they combined to shoot just 12 for 32.

Curry and Durant each scored five quick points as Golden State opened the third quarter with a 10-0 burst to go ahead 64-43.

Of riding the emotion with his shot — after so many questions about his perceived struggles so far this series — Curry noted, “You’ve got to be your biggest fan sometimes.”

Under pressure from Paul, Curry swished a 3 from way back with 5:06 left in the third. He struggled with his long-range shot again early but drove through the paint at every chance.

Curry hit a baseline 3-pointer at the 9:02 mark of the first but missed his next five 3s before going 4 for 5 in the second half. He is now 7 of 25 from long range — he made one in each of the first two games.

Both potent offenses were slow getting rolling as the teams played strong defense.

Harden and Paul began 3 for 14 with Paul missing six shots before getting his first basket on goaltending against Andre Iguodala 2:39 before halftime.

“Offensively we didn’t have any thrust, and they exploited it,” Harden said.

Golden State began getting the looks it liked after halftime. The Warriors faced more stingy, in-the-face pressure from Houston, making it hard to get any early flow shooting. Durant hit his first 3 6:27 before halftime then missed from the deep the next time down.

A moment of silence was held before the national anthem for victims of the Houston school shooting.