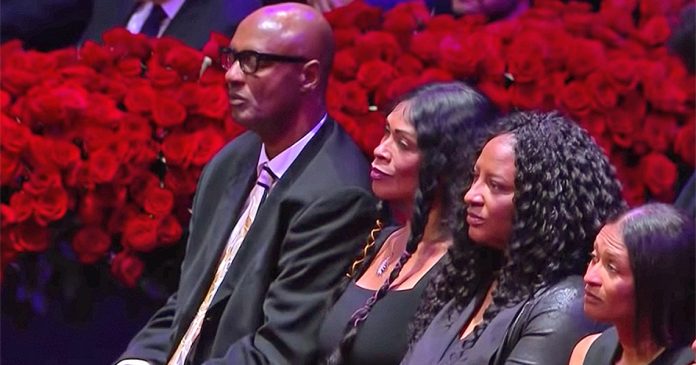 The parents of Kobe Bryant, who brought him into the world and raised him into the NBA legend he became, were not acknowledged during the memorial on Monday, Feb. 24, 2020, and many fans are seething about it.

But the most important people in the room, according to many fans, were the families of Kobe Bryant. The TV cameras constantly panned over to Vanessa Bryant. She was the centerpiece of the solemn proceedings as his widow who, with her surviving children in tow, gave a riveting tribute to Kobe and Gianna “Gigi” Bryant.

But seated on the opposite end of the row where Vanessa Bryant sat, was Kobe’s birth family, Joe and Pam, along with Bryant’s sisters, Sharia and Shaya.

Popculture.com took note of the conspicuous absence of the parents from the proceedings as they did not venture to the podium to speak about their legendary son.

“While the majority of fans were focused on the touching tributes, there were others that had some questions for those that planned the ceremony. Why weren’t Bryant’s parents, Joe and Pam, mentioned on Monday?” Popculture.com asked.

There is speculation that Vanessa Bryant never forgave Kobe’s parents, who did not attend their wedding out of disapproval of their union.

Regardless of what precipitated Joe and Pam Bryant’s exclusion from the memorial, the overall sentiment was succinctly summarized by the following tweet:

loved #KobeFarewell but to have Kobe’s parents & siblings not mentioned…Kobe did not get here via immaculate conception. Before Kobe was Kobe, he was Joe Bryant’s son the first to introduce him to the game, he was Pam Bryant’s son, his first love of a woman, he was a brother…

Many fans shared that feeling as you can see from the sampling of posts below:

It would be a SHAME before GOD if they exclude #Kobe’s parents from speaking at the services today! I dont care WHAT happened! That would be COLD! NEVER forget! Do the right thing! Period! #KobeFarewell #KobeandGianna #JoeBryant #JellyBeanBryant #kobeandgigi #kobememorial

Such a sad day for so many. Yet my WHOLE HEART ACHES for #PamBryant and #JoeBryant Kobe’s parents, who are present at the #StaplesCenter but have not been acknowledged by ANYONE. They are his PARENTS. 💔 pic.twitter.com/MwgTb0agAS