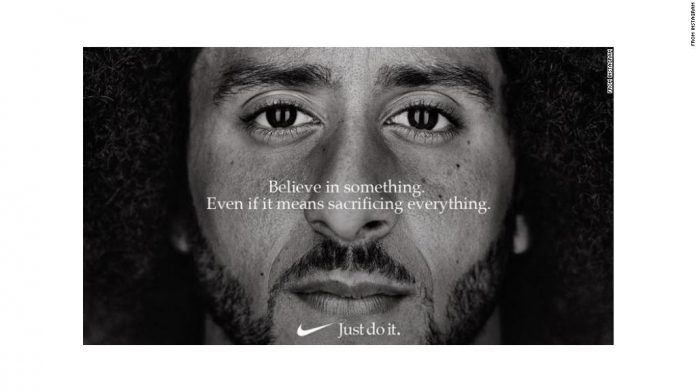 Since making Kaepernick the centerpiece of its newest “Just Do It” campaign, Nike’s online shoe sales have jumped up 31 percent, according to a report from Edison Trends, a San Francisco-based research firm. This is a good deal better than the 17 percent jump the retailer saw last year in the same time period, The Washington Post reports.

The Nike campaign celebrates the 30th anniversary of Nike’s signature “Just Do It” slogan.

“There was speculation that the Nike/Kaepernick campaign would lead to a drop in sales, but our data over the last week does not support that theory,” Edison Trends cofounder Hetal Pandya told Marketwatch.

Kaepernick is the former starting quarterback for the San Francisco 49ers who began taking a knee during the national anthem two seasons ago in protest of police misconduct against people of color. He has been unable to land a contract with any other NFL team since. President Trump and Republicans in Congress have been critical of Kaepernick’s stand, saying it is disrespectful to the American flag. Supporters point out that veterans fought for the right of Kaepernick and others to exercise their ability to protest.

On Labor Day, Nike issued the surprise launch of the campaign, which is dubbed “Dream Crazy.” In a 90-second commercial, Kaepernick says, “Calling a dream crazy is not an insult, it’s a compliment.” The commercial also features LeBron James, Serena Williamsand other sports stars. The campaign also features a close-up image of Kaepernick with the words, “Believe in something. Even if it means sacrificing everything.”

Kaepernick foes across the country posted images of themselves on social media burning their belongings featuring the Nike swoosh, while others have been proudly wearing shoes and clothing bearing the Nike symbol to the gym, in the street and everywhere else.