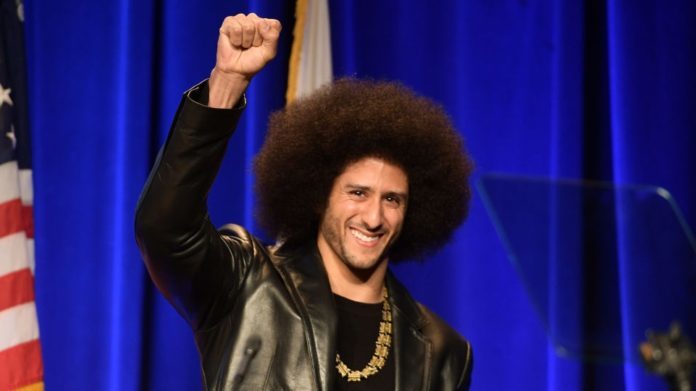 Four days before a new NFL season gets underway, Nike is throwing its weight behind one of the most polarizing figures in football, and America: former San Francisco 49ers quarterback Colin Kaepernick.

Kaepernick will be one of the faces of Nike’s 30th anniversary commemoration of its iconic “Just Do It” slogan. The campaign will also feature athletes such as Serena Williams, NFL wide receiver Odell Beckham Jr., and Shaquem Griffin, a rookie linebacker for the Seattle Seahawks whose left hand was amputated when he was a child.

Kaepernick tweeted out a photo from the campaign on Monday. Over a black-and-white picture of his face, a caption reads, “Believe in something. Even if it means sacrificing everything.”

In backing Kaepernick, whom the company has sponsored since 2011, Nike is making a high-stakes gamble that its customers support his protest, or at least that enough of them do. The company is also betting its brand can withstand criticism from conservative corners, including the White House.

Kaepernick has not played in the NFL since the 2016 season. That year, he began kneeling during the national anthem to raise awareness about police brutality against African-Americans and other racial injustices. Dozens of other players also began joining Kaepernick, and he has grown into a symbol of dividing lines over race in America.

In 2017, he filed a grievance against the NFL, alleging the league conspired to keep him out because of his protests. An arbiter last week denied the NFL’s request to throw out the grievance, allowing the case to proceed to a trial.

The protests have divided the league, often pitting a conservative white owner base against the NFL’s mostly African-American players.

The owners voted in May to approve rules that would have required players to stand on the sideline during the anthem or or remain in the locker room. Teams would be fined if players did not stand during the anthem, and the rules allowed individual teams to set their own policies.

Those rules are on hold while the league and the players’ association negotiate.

Trump and his allies have repeatedly seized on the issue. At a rally in Alabama last year, Trump said team owners should “get that son of a bitch off the field” if a player knelt in protest of injustice during the anthem. Vice President Mike Pence walked out of an Indianapolis Colts game after some players knelt.

“This is a very winning, strong issue for me,” Trump told Dallas Cowboys owner Jerry Jones last year, according to a sworn deposition Jones gave in connection with Kaepernick’s lawsuit.

Nike declined to comment on whether it expected Trump to criticize the company or how it would respond if he did.