DefenderNetwork.com
Home ENTERTAINMENT Celebrity O.J. Simpson dismisses Colin Kaepernick: ‘I Would Always Stand Up For The... 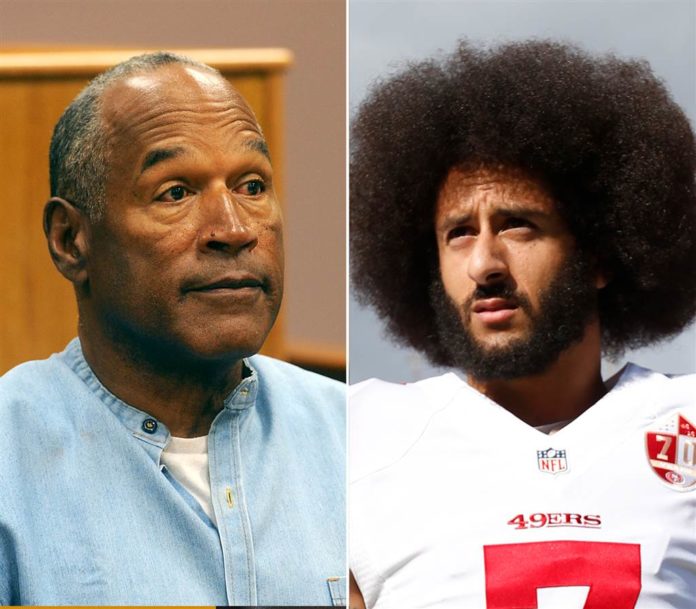 O.J. Simpson said he appreciated fellow football player Colin Kaepernick’s decision to kneel during the national anthem the first time he did it, but still thinks it was “a mistake.”

He also said that Donald Trump is a lot of fun to hang around with, although he doubts he’d ever vote for the man.

The former NFL great-turned-“Trial of the Century” defendant offered his take on a wide range of topics in an exclusive interview with the Buffalo News published Friday.

For one thing, Simpson disagrees with Kaepernick’s decision to protest police brutality by kneeling during the national anthem.

“I think Colin made a mistake. I really appreciate what he was trying to say. I thought he made a bad choice in attacking the flag,” Simpson told the newspaper. “I grew up at a time when deacons were in the KKK. I don’t disrespect the Bible because of those guys. The flag shouldn’t be disrespected because of what cops do. The flag represents what we want America to be.”

His bottom line: “I would always stand up for the flag.”

Simpson also hesitated to say whether he would have voted for Trump, whom he called “a man’s man.” (It was a hypothetical question because Simpson was behind bars in November 2016.)

The two men were once friends and golfing buddies. Simpson even attended the future president’s 1993 wedding to Marla Maples ― six months before he himself was accused of murdering his wife, Nicole Brown Simpson, as well as her friend Ronald Goldman.

He also admitted that he sometimes wonders if he has chronic traumatic encephalopathy (CTE) from his football days.

“Well, I don’t know,” he said. “I feel all right. But I have days when I can’t … I lose words, and I can’t come up with a simple word. I can’t remember a phone number, so forget that.”