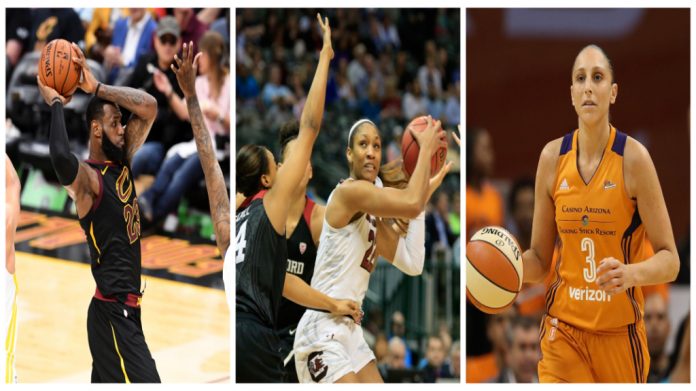 LeBron James officially signed a $153.3 million four-year contract with the L.A. Lakers. While we’re used to hearing these kinds of figures for big stars in the NBA and no one really bats an eye, what about the big stars in the WNBA?

A’ja Wilson, a 21-year-old WNBA rookie recently drafted #1 by the Las Vegas Aces, tweeted something over a week ago that was quite bold and valid about the huge pay gap between male and female ballers.

but Lord, let me get back in my lane pic.twitter.com/IFDZLlI53z

According to Forbes, the gap is astonishing. A woman comparable to LeBron James, and actually for many is seen as the Michael Jordan of the WNBA, is only getting paid $115,233. Her name is Diana Taurasi, and she is a guard for the Phoenix Mercury.

Although Taurasi has proved to be a dynamic player, she still makes less than rookie Michael Jordan did during his 1984-1985 season. He signed a $550,000 deal at that time.

Well, it all comes down to revenue. Forbes provided a breakdown of revenue that the NBA generated, and for the 2016-2017 season, they earned $7.368 billion. No revenue stats are known for the WNBA.

With revenue coming from ticket sales, Twitter, ESPN, partnerships with Tidal and FanDuel and other sources, Forbes estimates that revenue for the women’s league has to be higher than $52.4 million. But that still pales in comparison to the NBA’s $7.368 billion.

And that means WNBA players are paid less since the revenue is lower, which is understandable. But if the WNBA paid its players in a similar way to the NBA, with players getting 50% of league revenue and players being paid first and foremost to produce wins, then that would mean Taurasi should be paid $737,129.

What does anyone have to say about that?

“They deserve a lot more respect. They deserve to make a lot more money than they do. I think it’s time people start recognizing that they are professional athletes and they should be treated like it and their league should be elevated and treated that way as well,” Lillard said as reported by The Source.

“I think they deserve way more recognition than they’re getting… the excitement, the way they play, the skill level that they go out there and display is awesome,” DeRozan said.

While Taurasi herself hasn’t made a statement about the blatant wage gap, having Wilson speak up about it has caused many more people to become aware of not only how the WNBA stiff-arms its players, but how all industries pay women as little as possible and expect us to work as hard or harder than men.

“Seeing A’ja be a vocal leader about something like that and being a rookie was pretty big for everyone to see,” Khadijah Sessions, Wilson’s former USC teammate told WiSTV.