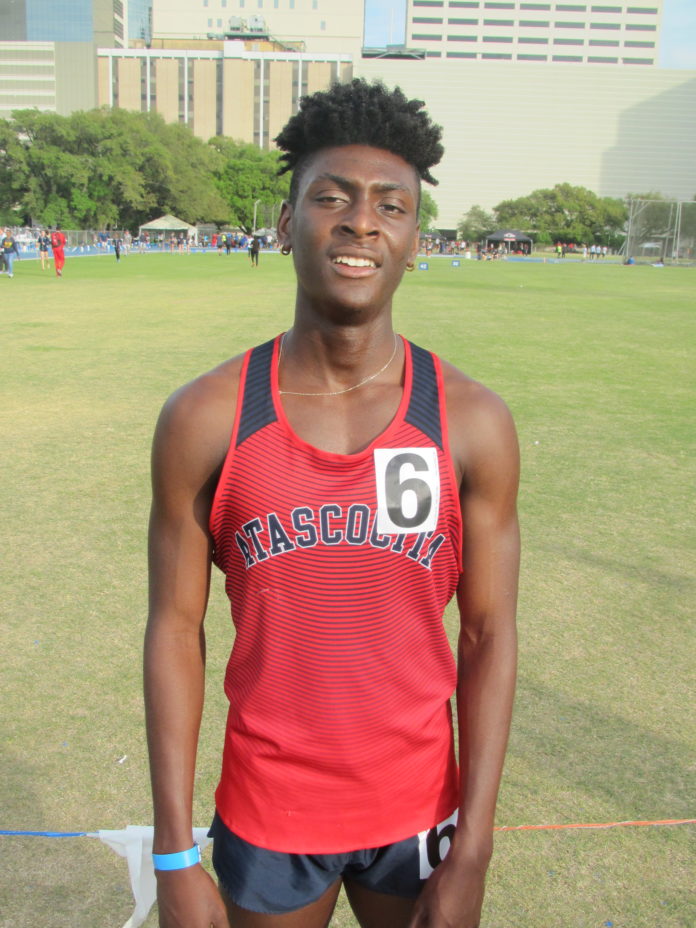 This was not unchartered territory for Christian “Happy” Gilmore.

The Atascocita High School senior standout middle distance runner had seen these familiar faces before and he was certainly no stranger to the event or the venue.

Some of the top high school track and field talent from across the Lone Star State assembled at Rice University for the 36th annual Victor Lopez Classic recently and Gilmore was the defending champion in the boys’ 800-meter run.

Coming down the stretch it was anybody’s race with Gilmore clinging to a narrow lead and holding off a competitive field with a winning time of one minute, 58.20 seconds to repeat as the event’s 2018 boys’ 800-meter champion.

Trent Nolen of Kingwood (1:58.61) finished second and the Summer Creek duo of Travis Jacobs and Solomon Brent settled for third and fourth.

“I race against these guys a lot and some of them are in our district,” Gilmore said. “I know the runners from Kingwood and Summer Creek are fast and always on me so I know what to expect.

Gilmore has good vibes at the facility that sits in the lap of the Texas Medical Center. Last year he set a personal-record time (1:54.00) in winning the 800 meters.

“I like this meet and there’s a lot of competition here,” Gilmore said. “It’s always one of my closest races and one of my season’s best peaks.”

“He’s raced a lot lately, at TSU last week, and he’s run a lot of races. He was a little conservative on the first lap today,” Simmons said. “A 57-second first lap is not that fast.

Simmons added that Gilmore’s 56-second second lap at Rice was indicative of something else.

“It shows his strength. That’s what I’m impressed with,” Simmons said. “The best thing about Happy is he does not want to lose. That’s his biggest strength. He’s got guts and he’s a great kid and a great athlete.”

Gilmore won at the district meet a year ago and advanced all the way to the state meet where he finished in sixth place. He’d like another shot at the state level.

“I wanted to come back and get better and faster in my first lap,” Gilmore said. “Hopefully I can go back to state and make a difference.”

Gilmore has college scholarship offers on the table but has yet to commit. Right now, he’s more concerned about the Atascocita High School mile relay foursome that he’s a part of.