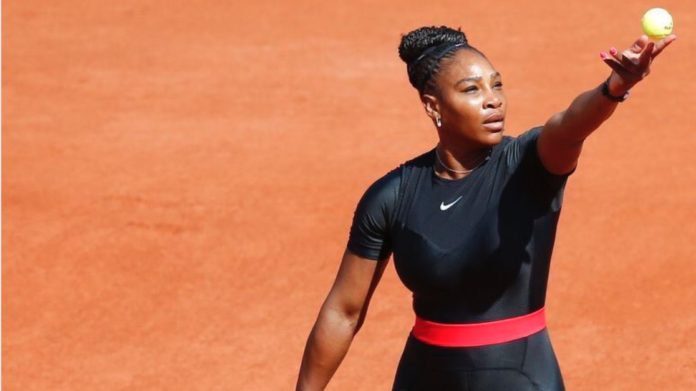 Serena Williams is back with a vengeance.

The superstar athlete just scored her first major win since giving birth to her daughter Alexis Olympia Ohanian, Jr. in September at the 2018 French Open and she looked damn good while doing it.

The French Open is the first grand slam Williams has competed in since she won the Australian Open while pregnant last year. She beat Kristyna Pliskova 7-6 (7-4), 6-4 in the tournament’s first round and she did it while wearing a killer black bodysuit that showed off her shape and peak fitness level less than a year after giving birth and bouncing back from a c-section as well as the life-threatening pulmonary embolism and subsequent hematoma she suffered having her daughter. The athlete was bed-ridden for six weeks and still managed to come back to the game a winner.

“All the moms out there who had a tough pregnancy and had to come back and try to be fierce in the middle of everything. I think that’s what this represents. It’s exciting. I think the catsuit is—you can’t beat a catsuit, right?,” she said during a post-match interview with The Tennis Channel.

Serena Williams entered the French Open as an unseeded player and her ranking fell from Np.1 to No. 451 after she had her daughter. That didn’t stop her from crushing her competitor, who’s currently ranked at No. 70 in the world.

She shared some inspiring words for her fans on social media and made it clear the win and the Nike catsuit were dedicated to the moms of the world. “Catsuit anyone? For all the moms out there who had a tough recovery from pregnancy—here you go. If I can do it, so can you. Love you all!!,” she posted.

The Being Serena star has documented her comeback on the HBO series that also chronicles her private life with her husband, Alexis Ohanian and their adorable baby girl.