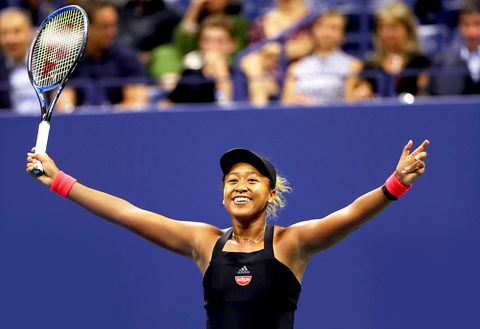 Days after her controversial victory against her idol, Serena Williams, US Open winner Naomi Osaka is set to sign the biggest deal Adidas has ever signed with a female athlete, Business Insider and The Times of London are reporting.

The contract for a cool $8.5 million will be announced Thursday, the news organizations report. It comes a few days after Williams’ loss in New York on Saturday after accusations from the US Open umpire that her coach was coaching her from the sidelines. That was one of three violations leveled against the tennis star, who was prompted to deliver a verbal takedown in which she called the umpire a thief. Some would argue that the umpire’s interference may have cost Williams the game.

Despite the drama, Osaka, a 20-year-old who is of Haitian and Asian background embraced Williams warmly after the game.

The report also comes amid buzz about the 30th anniversary “Just Do It” campaign from Adidas rival Nike featuring former San Francisco 49er Colin Kaepernick, who launched a grassroots movement – but remains without a team – by taking a knee during the national anthem at games to protest police misconduct and mistreatment of people of color. Serena Williams and LeBron James are among the outspoken athletes to appear in a commercial with Kaepernick for the campaign.

Yahoo reports that if the reports of the Adidas deal are true, it will vault Osaka up the list of Forbes’ highest paid female athletes. Her previous six-figure deal with Adidas is due to run out, various news organizations report.

Osaka’s agent, Stuart Duguid, told The Times of London that the deal will likely be announced publicly later this week.

Marketing experts predict Osaka is about to become a branding sensation, The New York Post is reporting.

The Osaka-Williams match has created an international discussion over the false stereotyping of the angry Black woman. An Australian newspaper artist has been roundly condemned on social media after publishing a cartoon in which Williams is depicted as masculine and angry.