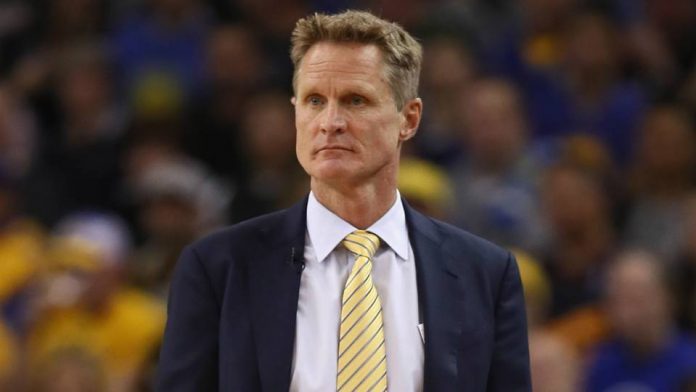 Steve Kerr, coach of basketball’s Golden State Warriors, said the NFL’s decision this week to ban peaceful protests during the national anthem is nothing but “fake patriotism” used to scare people.

Kerr railed against the new NFL policy while speaking to reporters in Houston ahead of Game 5 of the NBA’s Western Conference finals.

“I think it’s just typical of the NFL,” Kerr said. “They’re just playing off their fan base, and they’re just basically trying to use the anthem as fake patriotism, nationalism, scaring people. It’s idiotic, but that’s how the NFL has handled their business.”

The NFL’s decision, announced Wednesday, came in response to a public backlash, repeatedly pushed by President Donald Trump, against football players taking a knee during the anthem to protest racial inequality and police brutality. The demonstration began with Colin Kaepernick, then quarterback for the San Francisco 49ers, and it eventually cost him his job.

Since Kaepernick’s first protest on Aug. 14, 2016, at least 378 black Americans have been killed by police gunfire.

While polling has shown that views on the football players’ effort are deeply polarized, most Americans surveyed last fall said they believed the athletes were protesting police violence, not the American flag.

“I’m proud to be in a league that understands patriotism in America is about free speech,” Kerr said. “It’s about peacefully protesting. I think our leaders in the NBA understand that when an NFL player is kneeling, they were kneeling to protest police brutality, to protest racial inequality. They weren’t disrespecting the flag or the military, but our president decided to make it about that and the NFL followed suit and pandered to their fan base by creating this hysteria.”

Of course, the NBA is not without fault. As Deadspin points out, the NBA has long had a similar rule requiring players to stand during “The Star-Spangled Banner.” In 1996, Mahmoud Abdul-Rauf, a guard for the Denver Nuggets, refused to stand for the national anthem before games, citing his Muslim faith. For his actions, he was suspended indefinitely.

As Deadspin also points out, if the NBA were truly a “league that understands patriotism,” perhaps they would not have sent a memo to teams at the start of the season asking players not to protest during the national anthem.