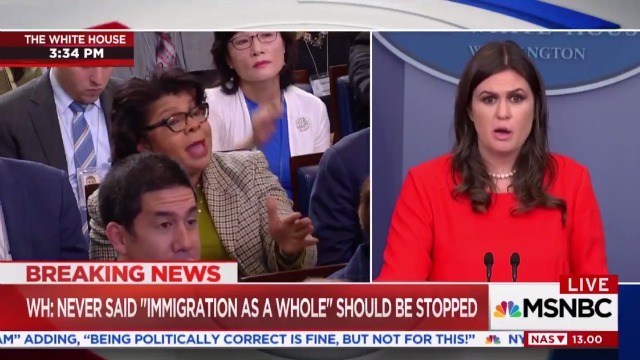 “Does this administration believe, does this president believe slavery was wrong?” Ryan asked, after insisting to a defensive Sanders that she was not making accusations but wanted to ask an honest question.

“I think it is disgusting and absurd to suggest that anyone inside of this building would support slavery,” Sanders responded.

Ryan’s question was a response to recent comments made by White House Chief of Staff John Kelly, who suggested that the Civil War was fought because the two sides could not compromise, telling Laura Ingraham of Fox News, “The lack of an ability to compromise led to the Civil War and men and women of good faith on both sides made their stand where their conscience had them make their stand.”

Ryan referenced these comments in her question to Sanders, pointing out that there was a compromise made in 1860, before the Civil War, that the South would be able to keep slavery but the North would not.