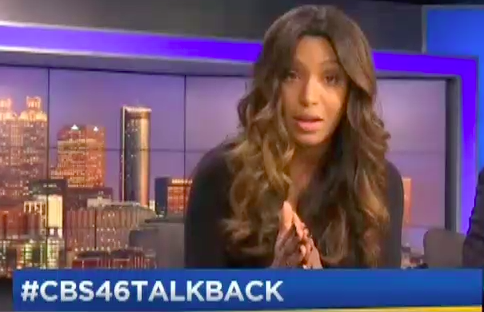 I really don’t think I had a choice.

When that vile email came across my computer at 9:26 p.m., I saw an opportunity. Yes, opportunity.

We were on the air live, discussing the role of race in the Atlanta mayoral election. Two women ― one white and one black ― were the last candidates standing in an extremely contentious election to succeed Mayor Kasim Reed. The campaign season had offered up subtle and not-so-subtle undertones of race throughout.

Race, and racial bias, was the story.

The format for our 9 p.m. show is loose and interactive. We put skin in the game (no pun intended) as anchors, sharing our opinions and viewpoints, and we invite viewers to give us their take. We promise to put their comments on the air whether they agree with our presentation of the issue or not.

I looked at my email and saw the word “Niger” ― (this particular viewer couldn’t spell the slur) ― and got a knot in my stomach. Adrenaline kicked in.

But it was a gift in real time. Black journalists, including yours truly, actually do get attacked by racist trolls. I could use this email to show anyone watching what we deal with ― sometimes every single day. Opportunity.

To hide it or censor it ― in my view, on that night ― seemed inherently wrong and the height of fake news.

People at home deserve to know the truth, not some version of events sanitized for them from our perch on the anchor desk. Especially when it goes to the heart of the matter. If we can’t keep it real during a discussion about race on the air in Atlanta, then when and where can we?

In the minutes after I read it, at 9:34 p.m., I forwarded the email to our executive producer. I asked if we could get this on the air and told him only that I’d like to comment. He wrote back immediately and said yes.

There wasn’t time to get my thoughts together. Truthfully, I could’ve used a few more minutes. I wanted some breathing room to get it just right and considered begging off until after the next commercial break. Ultimately, I decided to be authentic in the ad-lib ― and to trust the audience.

What came out of my mouth at 9:47 p.m. ― 21 minutes after receiving this offensive email ― wasn’t artful or polished, but it was real.

I can only speak to my experience, but make no mistake: It is a shared experience. Other black journalists are called “nigger,” too. In fact, if you know any black person who hasn’t had this happen, now there’s a story!

Many people have been reaching out to reaffirm just that, and to say thanks for putting it front and center.

The frequency ebbs and flows. Sometimes it’s related to content, or perceived opinions based on our skin color. Check these out. These are just a FEW of what appeared in my inbox over the course of only a few days.

Why do racists feel they can do this, that they can get away with this?

Because they can and generally do. I really don’t think there’s anything deeper. Racists often like to spit that word, because there is hardly ever any personal consequence for doing so. Especially now. In a time when we are calling people “white nationalists” instead of what their speech and actions actually dictate. Cool story, bro, but not one rooted in any fact.

Every single day, journalists of color get emails like the one I got. Most of us continue to do our jobs with excellence. You never even know. That seems like one of the reasons some people were stunned by how casually yet pointedly racist the email I got was.

Another factor: Most people are decent and just don’t harbor or peddle such trash. But ignorance of the lowest common denominator among us seems rooted in something else, too. We don’t have enough honest conversations about racism in mixed company.

It feels like some white people have a fear of being verbally pounced on for saying something awkward. And blacks? I certainly know the feeling. Some of us fear we might not be able to hold back … and could keep it too real.

Having had a minute to reflect on how things unfolded, I realize that the decision to put that email on the air was rooted in hurt, defiance and even “I told you so” to all of the people out there who doubt this happens. All of that, and on behalf of so many who sit in silence and simply take it. Our #MeToo.

I have an undergraduate degree from Georgetown University and master’s from Northwestern University. I’ve worked hard on my craft for years and I believe I am a skilled, balanced journalist who is naturally curious. It’s still not enough for another yahoo foaming at the mouth with racism. But then came the response to what I said on TV that night. Immediate. Swift. Overwhelming.

People across the country are speaking up and expressing a phenomenal amount of support. I’m grateful for so many of those views, but not because most people are supportive. It’s because, collectively, they offer a powerful lesson that I actually did not consider.

Nearly a week after my “clapback” went viral, after reading so many comments and listening to the voicemails, I realize there’s an equally important takeaway: Even though white people cannot ever know the black experience firsthand, most people get it when you simply serve up the details to them raw.

It reaffirms my belief in transparency in TV journalism. But, be certain ― even as I write this piece ― some in this industry claim disbelief, and even suggest I manufactured the email myself. Their displays show extreme callousness regarding the deep pain, divide and consequences of racism.

That’s a dark pivot. In truth, I have received enough racist emails for a small book.

In other news the sky is blue, the earth is round and common sense is something you pick up when you go outside and talk to people who don’t look like you or believe everything as you do. It also seems personal insecurities are validated when you choose to believe that an experienced colleague cannot possibly be poised or principled enough to actually confront a racist on the spot.

My final thought? It’s actually an acknowledgement. This has not been easy for our station management to navigate, but to their credit, my bosses handled it with grace and never-ending support.

And to the next journalist who is subjected to any kind of personal hate, my advice is to be strong, be honest, and don’t overthink the moment. Trust your instincts. They’re probably spot on.