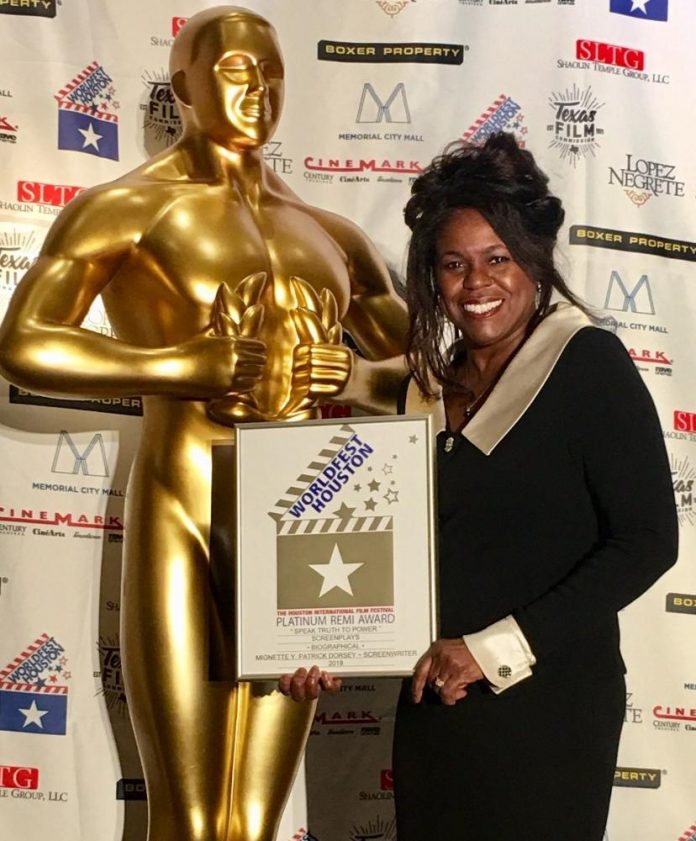 A dispute over a parking spot turned into a racially-charged, savage beating at the hands of three white police officers. What followed next shocked an entire community and sparked outrage that some say led to the start of the Civil Rights Movement. It was also the basis for Mignette Dorsey’s book, “Speak Truth to Power, the story of Charles Patrick, a Civil Rights Pioneer.”

Dorsey actually won the award for a screenplay she adapted from the book, which she wrote in 2010. Her work was among 4,500 category entries. A Remi Award is bestowed by WorldFest-Houston, an international film festival, in recognition of excellence in the entertainment industry, including film production, video production, and screenwriting, to name a few categories.

Dorsey worked as a journalist for the now-defunct Houston Postand later worked on a contract at the Houston Chronicle. She joined the communications staff at the City of Houston’s Public Works Department before being appointed Houston’s first bicycle-pedestrian coordinator by then Mayor Lee P. Brown.

She went on to create the first Communications Office for the newly-formed Building Services Department. Dorsey left the City to teach journalism and reading at Alief ISD’s Taylor High School. She is currently an English professor at Lone Star College-Houston North. She spoke with the Defender about her award.

Defender: Why did you decide to do write screenplay?

Mignette Dorsey:The story is very visual, and people who have read the book kept telling me to see it as a movie. More importantly, there was more to the story that I could not convey in the book, so I decided to script it.

Defender: Wouldn’t a story like this stir up animosity toward law enforcement and generate memories of days gone by?

Dorsey:I think if anything it will stir up pride in law enforcement officers who are tired of corrupt cops giving them a bad name. There are a lot of righteous cops out there. The book and the movie both show how law enforcement officials back in 1954 Birmingham took action, disciplined their own, instituted new policies, and cleaned house – their own house.

Defender: What about the phenomenon of “white guilt” that some feel when they view movies depicting life for African-Americans in that era? Won’t the story turn them off?

Dorsey: I think the same sense of pride white citizens experienced in 1954 would be experienced by white citizens in the 21st century. That’s because they will see how white citizens in a Southern state known for its racism went public in opposition to police brutality in the city of Birmingham. It was a first. They wrote letters to politicians, the newspapers, and were vocal on radio talk shows of that day. They weren’t having it. They wanted those officers off the force. And they got what they wanted.

Of course, it was all fueled by Charles Patrick’s own persistence, but I think seeing white citizens rally in support of a Black veteran will actually stir up a sense of pride in today’s audiences.