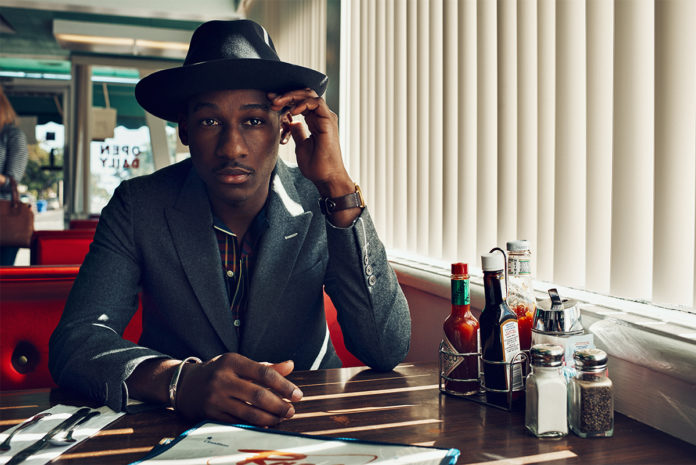 When the Houston Livestock Show and Rodeo announced its headliner for Black Heritage Night, many Black fans found themselves asking the same question: Who is Leon Bridges?

Fans, who looked forward to Black Heritage Night every year, swore off their attendance because rodeo officials had brought in an artist many people didn’t know. But those who did know the Fort Worth, Texas musician said this is one artist who deserved a chance to be heard. As for Bridges himself, he took the negative feedback in stride.

“It was kind of disappointing to hear the things people were saying,” Bridges said. “But I totally understand where they’re coming from. That night, people might not want to discover someone new. They want someone they can sing along to, so I understand. It was disappointing at first, but it’s all good. Me and my band are going to give 100 percent either way.”

It’s that positive attitude that has made the 26-year-old soul singer a quiet force to be reckoned with. He might not yet be a household name, but he’s well on his way.

“I’m very happy about the success I have had so far,” he said. “I’ve performed at the White House, I attended President Obama’s last birthday party, I’ve been on Saturday Night Live, so I’m grateful for the success and opportunities that I’ve had, including performing at the rodeo.”

Bridges’ debut album, ‘Coming Home,’ was released in June of 2015 to critical and public acclaim. In fact, his debut song sparked a furious bidding war shortly after it premiered in 2015 on taste-making blog Gorilla Vs. Bear. From there, he received rave reviews at Austin’s South by Southwest Festival, and earned big synchs in iTunes and Beats commercials.

Though some have compared the young soul singer to Sam Cooke, Bridges says he channels everyone from Bobby Womack to Ginuwine. He is frank about having no grounding in classic soul.

“It’s crazy — I didn’t grow up with any of this music,” said Bridges. “All this shows that you can’t teach soul music. It has to be something already inside you. It’s not something that you can try to do — it’s who you are.

Bridges decided to pursue the soulful side of his art once he realized “there’s a void out there, there’s no Black men making this kind of music. The only person I knew that was bringing it was Raphael Saadiq. It really spoke to me, so I really studied it, listening to it and looking at the blueprint, and wrote my idea of what a soul song sounds like.”

Fans describe his music as an effortlessly fluid sound, embracing tenor that doesn’t need to rely on melisma to immediately pull you in; warm blues melodies and simple but instantly familiar lyrics about love, losing love, his mother’s “rich in love” upbringing. He may only be three years into the game, but he exudes the quiet confidence of a seasoned veteran.

LISTEN TO LEON BRIDGES AT http://leonbridges.com

And so far, those who hear him, love him, though he did have someone tell him he should “add a little more funk.”

“That’s not a bad thing, but that’s just not what I do. I’m more on the smooth side of soul. I’m coming from a Ginuwine and Usher background, slow and smooth songs. And that’s why I really connected to Sam Cooke, because he was just very smooth. It’s not like the James Brown types, which is all great stuff, but he was totally set apart from those guys,” he said.

A native of Fort Worth, Bridges grew up in devout home, his mother disapproving of secular music.

“Even though she didn’t allow it, I’d still turn on the radio. But I didn’t have any albums,” he said.

Painfully shy as a kid, Bridges describes his childhood persona as an outsider. After his parents separated when he was seven, he split time between suburban Fort Worth and inner-city Dallas, where his father worked at a community center. His family was poor, and shortly after Hurricane Katrina, 10 relatives from New Orleans temporarily came to live with him, his mother and his half-sister. He was surrounded by people, but still felt alone.

“I didn’t know where I fit in,” he said. “I didn’t have any friends at school. People didn’t want to be friends [with me]. I had no place.”

At a nearby community college, Bridges studied dance, inspired by seeing his dad moonwalk as a kid, he says. He picked up singing and guitar as a hobby at first, and eventually began playing at open mics and small shows. His sound evolved from neo-soul, to folky R&B to traditional soul with horn.

He played in local bars for a few years – often to no more than 20 people. He bused tables and lived at home. After his mother lost her medical-field job, he got a second one washing dishes. Then he met Austin Jenkins, guitarist from Austin psych-rock band White Denim, at a Fort Worth bar. He noticed Bridges’ singular ’50s fashion style — crisp slacks, starched collars, high-waist jeans, exquisite vintage suits. Jenkins was blown away by his music.

“He’s singing to you, not at you,” says Jenkins, who co-produced Coming Home with fellow White Denim partner Joshua Block. “He listened to Texas blues, gospel and R&B, and filtered it through himself. It’s authentic and direct.”

A night to remember

The rodeo’s Black Heritage Night is the most popular night for African Americans. Past performers have included everyone from Frankie Beverly and Maze to John Legend and Alicia Keys. And like past events, Bridges said concert-goers will be treated to a night they won’t forget.

“It will be a night of good R& B music and some good energy. I’m proud to be a Texan and proud to be at the Houston rodeo presenting my art,” said Bridges, adding that the negativity is just fuel for him to give the best show ever. “I just take it all in. Its exciting that I can hopefully gain new fans after the show.”