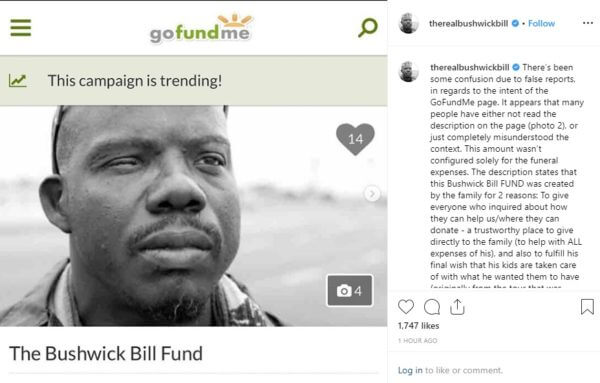 Bushwick Bill‘s family created a GoFundMe page for a few reasons. One, they wanted to carry out the late rapper’s desire to have his children taken care of. Secondly, they needed to provide a legitimate place for people to donate.

On top of that, they wanted to help his family with any costs associated with the rapper’s death.

As reported, Bill, who was one-third of the iconic rap group the Geto Boys, passed away from pancreatic cancer on June 9 at age 52.

The GoFundMe campaign was launched by Bill’s family six days after his death, and they explained its purpose on the page.

“This was created in response to the hundreds of people that have reached out and inquired about how they can help, as well as to combat the recent fake/unauthorized memorial events being promoted and claiming to donate proceeds to the family,” reads the page.

But on Monday, as money started to trickle in, the family took to Instagram and clarified what the campaign is actually for.

Based on their message, some thought the money was only to help with funeral costs, but they made it clear it’s mainly for his children and fans who were looking to help them out.

When the Geto Boys member first announced his cancer diagnosis in May, he said leaving something behind for his children was his main priority. To do that, he was working on three new albums and possibly a book and documentary.

Bill also mentioned that since he didn’t own the publishing rights to the Geto Boys’ music, he wasn’t counting on a lot of money coming in.

“Rest in peace Bushwick Bill!!!” one person wrote on the GoFundMe page. “Much love for all the music and all you have done for HipHop and your family. Condolences and positivity. Sending prayers for you all.”