DefenderNetwork.com
Home ENTERTAINMENT Chadwick Boseman’s ’42’ to return to theaters as tribute to actor 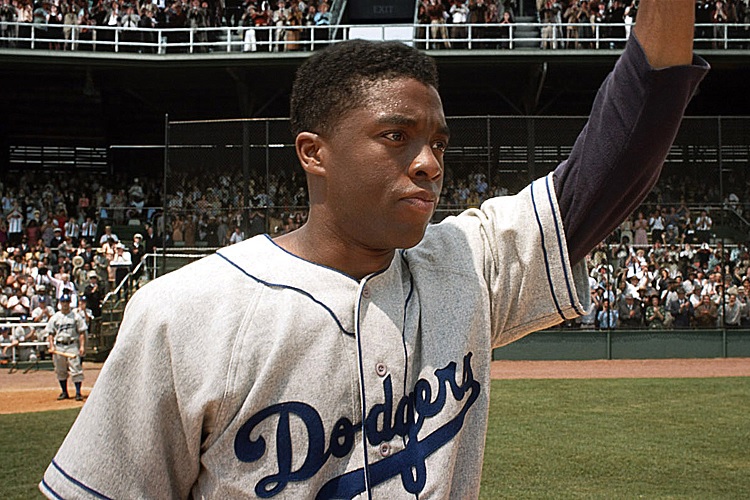 Robinson was the first Black player in Major League Baseball in 1947, and Boseman played him in the 2013 sports drama. AMC Theaters will screen the film in more than 300 locations starting Thursday. Tickets will cost $5 and go on sale late Tuesday, PEOPLE reports.

The actor died after a long battle with colon cancer on Aug. 28, which also happened to be the same day the MLB celebrated Jackie Robinson Day. The tribute was initially set to take place on April 15 but was pushed back when the season was postponed due to the coronavirus pandemic.

In the days since Boseman’s death, fellow celebrities and fans have flooded social media with tributes. His 42 costar Harrison Ford, described him as “compelling, powerful and truthful as the characters he chose to play,” Ford said in a statement to The Hollywood Reporter. “His intelligence, personal dignity and deep commitment inspired his colleagues and elevated the stories he told. He is as much a hero as any he played. He is loved and will be deeply missed,” he added.

“Chadwick was a dear friend of the Foundation – lending his time and visibility to help advance our mission,” the charity posted on Twitter Saturday. “Preparing for his starring role in ’42,’ he studied extensively and spent considerable time with [Jackie’s wife] Rachel Robinson. A consummate professional, he absorbed every story, every memory and every photo and film excerpt he could consume to help translate the soul of an American hero. And now, Chadwick will be etched in history as a hero in his own right, especially having shown millions of black and Brown children the power of a superhero who looks like them.”

The film follows the rising “tensions and temperatures over the course of an afternoon recording session in 1920s Chicago, as a band of musicians await trailblazing performer, the legendary ‘Mother of the Blues,’ Ma Rainey.”

My friend Chad is on the far left. We created something beautiful together. His last film Ma Rainey’s Black Bottom. The film wrestles with God. We wrestled with August Wilson’s text. We wrestled with music. We wrestled with faith. We shared such a loving brotherhood since the first time we did a reading together many moons ago at New York Stage and Film. Each time I always thought, he was such a shy, cool, kinda strange intellectual brother. Knowing him on the journey of Ma was a true gift. I will miss him and honor his incredible legacy that he built in 43 years. Goodnight friend.