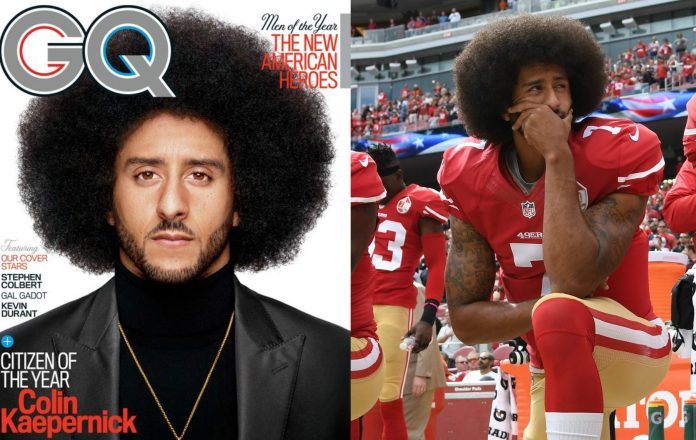 GQ has just named Colin Kaepernick as its “Citizen of the Year.”

In a special December issue of the magazine, Kaepernick paired with GQ as well as ten of his closest allies and friends to “reclaim the narrative of his protest.”

In the issue, the magazine called Kaepernick “the man who became the movement” and referenced the fact that, four years ago, Kaepernick had been on the cover as one of the rising stars in American football.

HE IS STILL, TO THIS DAY, ONE OF THE MOST GIFTED QUARTERBACKS ON EARTH. AND YET HE HAS BEEN LOCKED OUT OF THE GAME HE LOVES—BLACKBALLED—BECAUSE OF ONE SIMPLE GESTURE: HE KNELT DURING THE PLAYING OF OUR NATIONAL ANTHEM. AND HE DID IT FOR A CLEAR REASON, ONE THAT HAS BEEN LOST IN THE YEARLONG STORM THAT FOLLOWED. HE DID IT TO PROTEST SYSTEMIC OPPRESSION AND, MORE SPECIFICALLY, AS HE SAID REPEATEDLY AT THE TIME, POLICE BRUTALITY TOWARD BLACK PEOPLE.

But rather than speaking for himself about his protests, Kaepernick has vowed to keep his silence on the matter, and instead, the piece features ten people close to the former 49ers quarterback who spoke about what the protest means to them and what we can do, as a nation, to keep speaking out against injustice.

Check out the feature here.