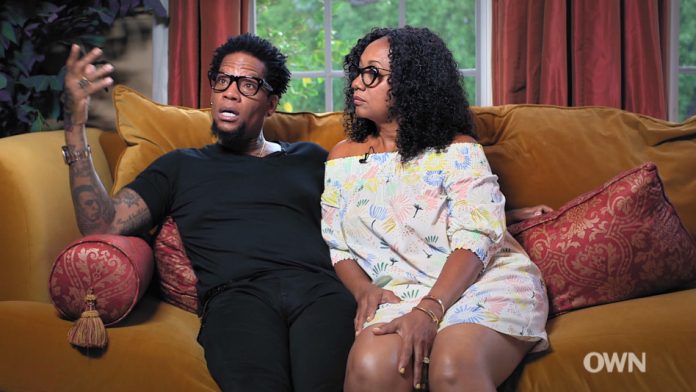 D.L. Hughley wasn’t the best husband to his wife of 30 years Ladonna, and he admitted it on an episode of OWN’s “Black Love.”

It wasn’t the first time he talked about mistreating his wife, but this time he did it on camera right in front of her.

“The way I grew up was, you had to take care of your family, you had to beat the sun home and you had to make sure no bulls–t came to your house,” he said. “And I was only successful with one of those.”

D.L. then talked about abusing his wife emotionally and being unfaithful.

The famed funny man is the third comedian in recent months who admitted to either cheating on his spouse or mistreating her in other ways. For example, Chris Rock said he was the reason his marriage ended to his ex-wife Malaak Compton after 16 years.

“It’s my fault, because I’m a f—-king asshole,” he said during his recent comedy special “Tamborine.” “I didn’t listen. I wasn’t kind. I had an attitude. I thought, ‘I pay for everything, I can do what I want.’ That sh-t don’t f–king work. I just thought I was the sh-t.”

And in 2017 Kevin Hart confessed to cheating on his then pregnant wife after he was spotted on video spending time with a woman named Montia Sabbag. He was also extorted for that footage, and the person responsible turned out to be a longtime friend of his named J.T. Jackson, who’s since been charged with a felony.

With D.L.’s admission, he didn’t give details about his cheating on “Black Love,” but he did talk about it last year on Angela Yee’s podcast “Lip Service.” The comedian said that he was unfaithful at the very beginning of his career and fathered a child with another woman in the process.

“I had knocked this chick up and had the baby and the baby got killed by her boyfriend,” Hughley explained. “It was a horrible, horrible experience. I had this baby that I’m paying for … I was scared, I was married … Finally, one day I tell my wife and you know what she said to me? ‘I wish you would have told me this, and we could’ve went through this together.’”