DeAndre Arnold, a high school senior from Texas who captured widespread attention earlier this month after he was told he would have to cut his dreadlocks in order to attend graduation, was surprised with a $20,000 scholarship during his appearance on “Ellen” this week.

In an episode of the daytime talk show that aired on Wednesday, host Ellen DeGeneres got a chance to talk to Arnold about the controversy involving himself and the Barbers Hill Independent School District (ISD) in Mont Belvieu, Texas.

During the segment, Arnold said that he had been suspended from school by the district for refusing to cut his hair in compliance with the district’s hair length policy.

“Let’s say you want to go back to school tomorrow. What happens?” DeGeneres asked him.

“So, if I go back to school tomorrow, my only options are in school suspension or alternative school,” the 18-year-old responded, adding: “Alternative school is where all the kids that have behavioral issues, sell drugs, fight all the time.”

“Like I wish the best for them and I know they have good qualities in them,” he continued. “But I don’t deserve to be grouped with them.”

“And they won’t allow you to walk in graduation, which is the biggest – you get that far through school, and you want to walk graduation,” she continued.

After a commercial break, DeGeneres makes an on-camera plea to the Texas school district, urging them to “do the right thing,” before surprising Arnold with a $20,000 scholarship from Shutterfly that was presented to him by Alicia Keys. 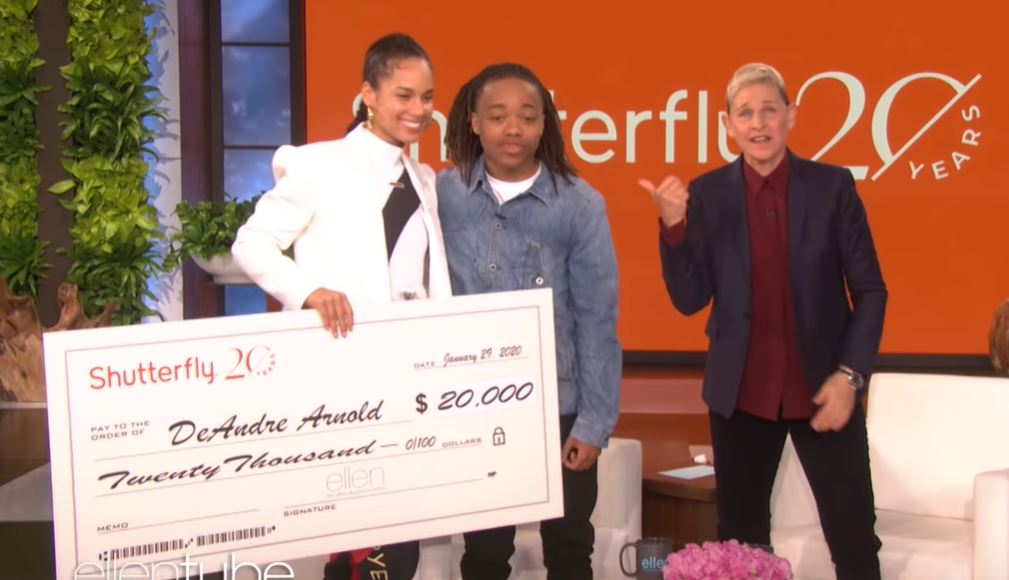 “I want to tell you that, I couldn’t believe the story when I heard it,” the singer told Arnold. “And I’m super proud of you for standing up for what you know is right. And I know that the school needs to do the right thing.”

Arnold was thrusted into the national spotlight earlier this month following reports that he was told that he wouldn’t be able to walk during his upcoming graduation if he didn’t cut his dreadlocks.

The policy has been condemned as “racist” by critics in recent weeks, but school officials have pushed back, saying it has been in effect for years.

“Barbers Hill ISD has a long standing dress code, but we absolutely allow dreadlocks. What we do not allow is any action that circumvents or violates the provision regarding hair length,” a representative from school district told The Hill in a written statement earlier this month. “The student in question was NEVER forbidden from attending school.”

However, Arnold has refused to cut his shorter, citing his appreciation for his Trinidadian culture.

During his interview with DeGeneres on Wednesday, Arnold said his hair is “really important” to him because his father is from Trinidad.

“It’s part of our culture and our heritage,” he said. “And I really wish the school would kind of be open to other cultures, and just at least let us try to tell you some things. Don’t just shut us out.”

The viral story comes as a conversation around the policing of black hair picks up more traction nationwide as more states continue to pass legislation seeking to crack down on race-based hair discrimination in the workplace and in the classroom.