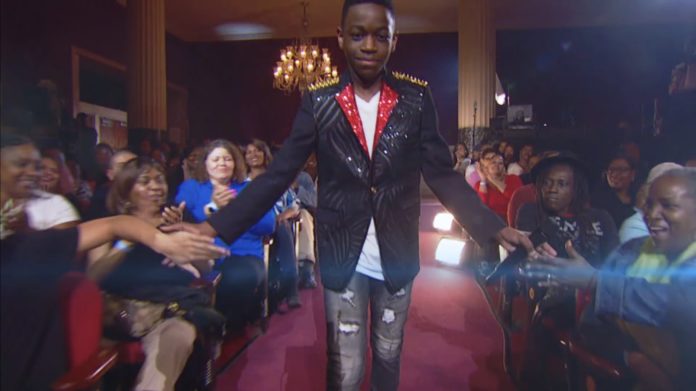 Now, the world will hear him perform the cover song “When A Woman Loves” by R. Kelly this season on “Showtime at the Apollo,” which airs every Thursday at 8 p.m. on FOX.

“It was an amazing moment when I found out I would be performing at the Apollo,” DeCory said. “Having the opportunity to perform for one of the ‘livest’ audiences made me feel like I made it to the big league and closer to my dreams!”

DeCory is described as an electrifying, high-energy pop/R&B artist coupled with an old soul. After deciding early on to become an entertainer, it meant that his evenings, weekends and summers were forever changed with countless hours of dedication to perfecting his vocal, choreograph and performance abilities. His hard work earned him the Spring Branch’s youth musical ambassador role where he performed to his first full stadium audience at the age of 11.

Today, his credentials include singing the National Anthem for the Houston Texans, Running of the Bulls 5K, New Orleans Pelicans vs. Dallas Mavericks game, and for three consecutive years at the Spring Branch ISD convocation. On any given day, you can find DeCory performing to thousands at various venues, community outreach locations, conventions and festivals throughout the Texas and Louisiana region.

“The moment he told me he wanted to become a full-fledged entertainer, I explained to him the sacrifices it was going to take to achieve greatness,” his manager and father D’Juan Baham said.

Baham evaluated the next move for DeCory’s career, choosing between a drive to SXSW and a ticket to New York.

DeCory and his family have been counting down the Apollo episodes of which his performance will be viewed on national television. To build the momentum, DeCory will debut his single “Wait a Minute” this week.

“The song talks about the peer pressure of people attempting to distract me from my goals,” DeCory said. “I’m telling everybody to ‘Wait a Minute’ so I can stay focused.”

DeCory is the recipient of the 2016-2017 “I AM Spring Branch” award, exemplifying “Every child, collective greatness, collaborative spirit, limitless curiosity and moral compass.”

His ultimate goals are to share his gift of music with the world while inspiring others to find their inner greatness.”