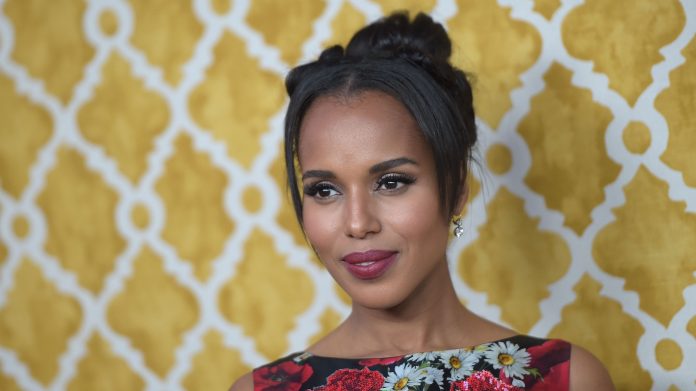 For all those lamenting the loss of our favorite gladiator Kerry Washington now that Scandal has ended have no fear because the award-winning actress has several new projects in the works.

Washington has been tapped to produce the Hulu streaming series Old City Blues about a corrupt dystopian society set in 2048.

Washington not only has her hands full as a mom of two toddlers, but she’s tackling two other shows she signed on to produce as well.

Old City Blues is a futuristic story set in New Athens atop the remnants of Greece, filled with high-tech bad guys, smugglers, drug dealers and corrupt politicians, according to the Daily Mail.

The premise of the show reportedly revolves around a special police force trying to keep the city from being over run by criminals after the founder of a tech company is killed.

But exactly what role Washington will assume, remains a mystery for now. But it sounds like being a fixer again, would fit the bill.

Reese Witherspoon and Washington also recently announced they are teaming up for a limited series, Little Fires Everywhere, based on the best-selling book by Celeste Ng.

In the book, two families come to know one another through their children and must pick sides in a surprising custody battle.

And in October, Kerry Washington will stretch her acting chops and head to Broadway to star in American Son.

“#Repost @simpsonstreet Broadway bound!!!! @AmericanSonPlay begins its limited run in less than 2 months. You don’t want to miss it! #AmericanSonPlay,” she shared along with a photo of her with co-star Steven Pasquale.

“he play is a gripping tale about who we are as a nation, and how we deal with family, relationships, love, loss and identity,” according to the American Son website (www.americansonplay.com).