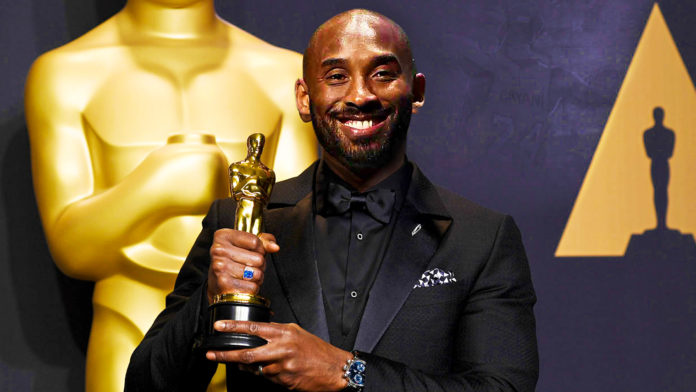 After a basketball career that spanned 20 years and included five NBA championships, two NBA Finals MVPs and an NBA MVP honor, Kobe Bryant has literally done it all. Now Bryant will have to clear some space on his mantle for his latest trophy, an Oscar.

At the 90th annual Academy Awards Bryant recently won an Oscar for Best Animated Short Film, “Dear Basketball”. The other nominees in the category were: “Garden Party,” “Lou,” “Negative Space” and “Revolting Rhymes.”

With “Short” being the operative word, the film is a mere six minutes long and is based on Bryant’s retirement letter in the Players Tribune from 2015. In the letter, Bryant described his passion for basketball.

Bryant’s poem begins: “Dear Basketball, from the moment I started rolling my dad’s tube socks, and shooting imaginary game-winning shots in the Great Western Forum, I knew one thing was real: I fell in love with you.”

It reflects on how time is running out. “I can’t love you obsessively for much longer,” it says. “This season is all I have left to give. My heart can take the pounding, my mind can handle the grind. But my body knows it’s time to say goodbye.”

Staring at the award in disbelief, Bryant delivered an acceptance speech that had a word for conservative critic Laura Ingraham of Fox News. Ingraham advised LeBron James and Kevin Durant to “shut up and dribble” after the two players were shown in a video criticizing President Donald Trump.

“I’ve always been told that as basketball players the expectation is that you play,” Bryant said. “This is all you know. This is all you do. Don’t think about handling finances. Don’t think about going into business. Don’t think that you want to be a writer, that’s cute. I got that a lot. What do you want to do when you retire? ‘Well, I want to be a storyteller.’ That’s cute. This is a form of validation for people to look and say, ‘OK, he really can do something other than dribble and shoot.’ ”

“It’s a message for all of us,” film director Glen Keane said during his acceptance speech. “Whatever form your dream may take, it’s through passion and perseverance that the impossible is possible.”

Bryant said he received his inspiration to turn the project into a film from his 11-year-old daughter Gianna, who told him, “Dad, you always tell us to go after our dreams, so man up.”

In a post-award press conference Bryant compared his feelings to his basketball accomplishments.

“I feel better than winning a championship, to be honest with you. I swear I do,” Bryant said.

He recalled the response he received from so-called experts who thought his decision to write was a pipe dream.

“That’s cute. You’ll be depressed when your career’s over. To be here now and have this sense of validation, this is crazy, man,” Bryant continued. “I wake up in the morning, I can’t wait to write, I can’t wait to get to the studio.”