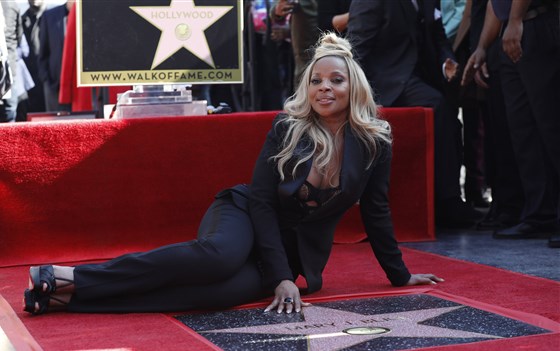 Blige was honored in the category of Recording on her 47th birthday.

“I am so grateful,” Blige said during the ceremony. “On this day, my birthday, God put my name on a star.”

“I am feeling like a proud musical father,” said Harrell, who founded Uptown Records, the label that signed Blige in 1989 when she was 18 years old. “Mary receiving a star on the Walk of Fame, is like black women and little girls from around the world with a dream also receiving one.”

Harrell reflected on the day he first heard Blige’s voice.

“I remember asking, ‘Who is this young girl singing with all this emotion and pain.’ I still remember the expression on your face when I told you your voice would sing with rock legends; that your voice would change your life and make you royal.”

Combs referred to Blige as family, adding that through her music, she has saved a lot of lives.

“We have been through a whole lot. We started from nothing,” he said. “What makes Mary special, she moves people with not just with her voice but with who she is. She pours everything into a record and into a performance. Whatever she is going through, she knows she has a responsibility for those going through the same thing.”

Music producers Jimmy Jam and Terry Lewis, along with the writer and director of Netflix hit “Mudbound,” Dee Rees, were also in attendance. Blige was nominated this year for a Golden Globe Award and SAG Award in the categories of best supporting actress in a motion picture for her role in “Mudbound.”

“When Dee Rees called me, my life was at a standstill. My career was stagnant,” Blige said. “Dee Rees helped save my life and gave me the strength I did not know I had. And Mudbound has opened up doors.”

Blige also expressed her gratitude to Debra Lee, chairwoman and CEO of BET, for Lee’s constant support during her career. Blige’s star is the 2,626th star on the Walk of Fame since its completion in 1961.

Throughout her career, Blige has had a continuous stream of musical successes. After the release of her 1992 debut, “What’s The 411,” Blige became a multi-platinum music star. She would follow that success with albums “My Life” (1994), “Mary” (1999), “No More Drama” (2001), and many others. Her musical catalog reads like a diary or autobiography and has garnered her nine Grammy Awards along withworldwide sales of more than 50 million albums.

A native of Bronx, New York, Blige said she loved to sing growing up because singing set her free.

“We had love in our home, but negativity and confusion was happening around us outside,” she said at the Walk of Fame ceremony. “We learned how to survive.”

And it has been that survival instinct that has sustained her throughout her career, even in moments when she felt like the realities of her own personal life were too much to handle.

“There were times when I didn’t want to step outside my house because I had been hurt so bad,” she told the crowd during her acceptance speech. “But, I thank God for this moment. Everything happens for a reason. God has given me the strength to keep going regardless of who hated me or what anyone said about me.”