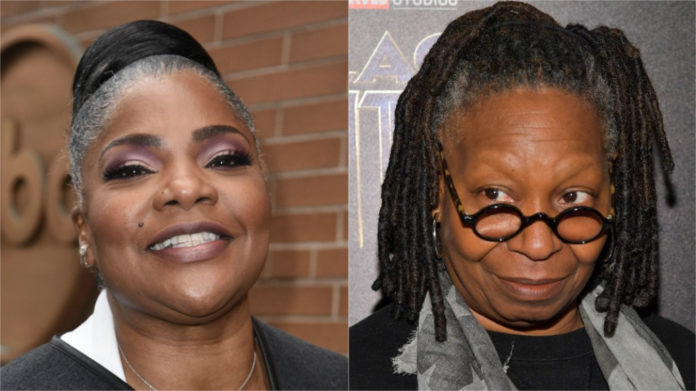 While visiting New York, Mo’Nique stopped by The View on Thursday to talk with the hosts about her Netflix boycott and being blackballed in the industry. One of the most interesting moments in the conversation was when Joy Behar asked Mo’Nique to plainly explain what it was about her behavior when she worked on Precious that has since impacted her career in Hollywood, and in turn, possibly played a part in Netflix feeling as though she wasn’t worth the millions she was expecting for a comedy special. She said she was asked to promote the independent film at the Cannes Film Festival after it came out, and when she said she couldn’t do it, those involved in the project weren’t happy.

“Eight years ago I did a movie called Precious. On that film I received $50,000. That was not my argument, nor my fight because that’s what I signed up for,” she said. “My deal was with a man named Lee Daniels. I did all of my contractual obligations and I was done. Then I started getting phone calls from Lee Daniels, Tyler Perry and Oprah Winfrey. They wanted me to come work for free. To go over to Cannes and promote this film internationally. I said to them, ‘Guys, my deal is with Lee Daniels and I’ve done my job.’ And they all agreed.”

Mo’Nique would go on to try and compare her decision to not play the Hollywood game with women of the #MeToo movement who had to deal with mistreatment from those in the industry with power for not allowing sexual advances. “And this is what happens, in my humble opinion, when you don’t go up to the hotel room,” she said. At that point, Whoopi Goldberg had heard enough. Whoopi basically told Mo’Nique that at the time, she didn’t know the rules of how things worked when it came to such projects, and she should have reached out to her before saying no to promoting.

“I’m going to stop you,” Goldberg interjected. “Because contractually, when you make a movie, regardless of who you sign the deal with, your job is to go and promote said movie. So, when they wanted you to come — and we’ve had this conversation. I told you, ‘If you had called me, I could have schooled you on what was expected.’”

After referring to Whoopi as her “sweet sista,” Mo’Nique went on to say that contractually, she did what was expected of her and thought the reaction to not wanting to go above and beyond that was her being bullied.

“If I had done something wrong contractually, they would have sued me,” she said. “The reason why no one could do anything to me contractually was because they found out I did nothing wrong contractually. So when they asked me to go overseas to promote the film, I said, ‘Guys, I’m spending time with my family. I’m going to pass.’ Now when I make this statement, ‘This is what happens when you don’t go to the room,’ what Tyler Perry showed me, Lee Daniels, Oprah Winfrey and Lionsgate, is when you don’t do what we ask you to do, we’ll take your livelihood. So for eight years, my family has suffered and my career has suffered because what I would not allow those entities to do was bully me. And because I didn’t allow the bullying to happen, this is now what I sit in.”

Whoopi, seemingly confused by the interaction, went ahead and wrapped up the short interview to go to commercial, leaving Mo’Nique with more to say but not enough time.

Check out what she was able to share about why she’s speaking out against Netflix, her ability to put behinds in seats at her shows, and why the company’s low offers to Black female comedians, including Wanda Sykes, is “suspicious”: