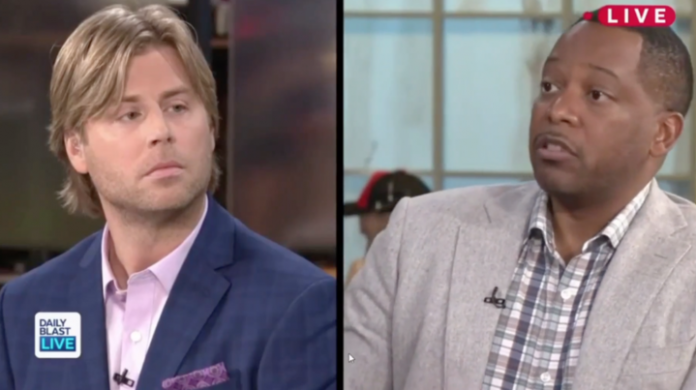 “Daily Blast Live,” a daily live-streaming show on social media, has scrubbed its social media of a contentious discussion about political correctness and white privilege between hosts Al Jackson and Beau Davidson that aired on the program Wednesday.

“Are we living in a new P.C. world?” host Sam Schacher asked to kick off a group discussion of two recent news items: the highly racist cartoon of Serena Williams that went viral after her final game in the U.S. Open against Naomi Osaka and Norm Macdonald’s “Tonight Show” gig being canceled after he made disparaging comments about the Me Too movement.

Jackson was asked to respond to those saying that the cartoon was not racist.

“Racism is depending on who is privileged and who isn’t,” said Jackson. “The person who wrote [the cartoon] I’m assuming is a white male. And a white male can never understand what marginalized people feel and think.”

Jackson went on to highlight the different experiences of a white man and a man of color, using his colleague Davidson as an example of someone with white privilege.

I’ll ask you this, and this is going to sound like a shot but it’s not. You’re on a social media show and you have a hundred Twitter followers. You have a thousand Instagram followers. I have 30,000. I have a master’s in biomedical sciences. I have over 200 TV appearances. You are the living embodiment of white privilege. You have no business on this panel with us, but you’re here because of your privilege. I have hundreds of black people, brown people in my phone that are more qualified, have done more in their career to deserve to be in that seat. But you sit there, because of your white privilege.

In response to Jackson’s comments, Davidson said, “Well I’m sorry you feel this way.” Jackson responded: “No, these are just facts. We need numbers.”

Davidson went on to say that Jackson has “no idea” what he’s been through and cited that he was once sexually harassed on a job, worked hard to get good grades to get into college, and has to struggle to get acting roles.

Jackson countered, asking Davidson to imagine he was a black woman dealing with those same problems. Davidson responded that he isn’t a rich man and that God guides him.

The clips of the conversation, and posts connected to the clips, have since been removed from the show’s social media pages.

One individual on Twitter noted that when they shared video of the moment on their page, they received a Digital Millenium Copyright Act takedown notice from the producers.