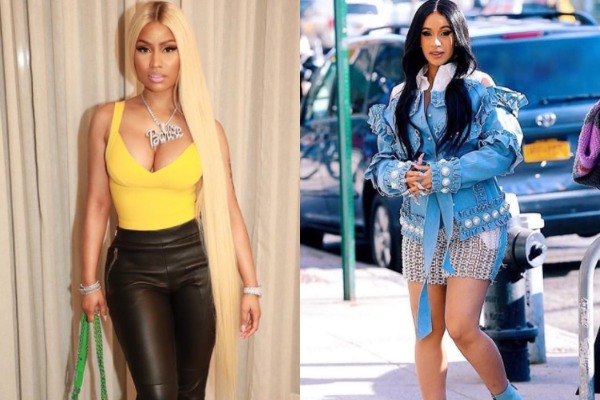 Nicki Minaj said she feels hurt by Cardi B.

It’s something she told Zane Lowe on his Beats 1 Radio earlier this morning as two new tracks“Chun Li” and “Barbie Tingz” hit the airwaves.

According to Nicki, she felt slighted by the “Bodak Yellow” creator after they worked together on the song “MotorSport” with Migos rapper Quavo.

After the song’s release, Cardi said Nicki changed her verse. After that news came out, people accused the Young Money spitter of changing her verse at the last minute so it would be better than Cardi’s, which some would call improper hip-hop etiquette.

But the way Nicki sees it, the Bronx native shouldn’t have mentioned anything about her lyrics being changed and when the backlash came, she should’ve defended her. The Queens lyricist added that Cardi failed to show the proper amount of appreciation for being on a song with her in the first place.

“The only thing with Cardi that really, really hurt my feelings was the first interview she did after ‘MotorSport’ came out,” said Nicki. “I remember when I first came into the game, if a female of that stature done a feature with me on it, I would only be singing their praises and saying thank you. [In the interview] she looked so aggravated and angry, and the only thing she kept saying was ‘Oh, I didn’t hear that verse, I didn’t hear that verse. She changed her verse.’” I was like ‘What?’”

“I can just imagine how many girls wished they could have been on a song with Nicki Minaj,” she added, right before shedding tears. “I’m not saying it in a cocky way, but the first thing out of your mouth when someone asks you about a Nicki Minaj feature is she changed her verse? Excuse me? It’s because of the Nicki hate parade that she felt the comfortability to address me in that manner.”

In another part of the interview, the “Anaconda” creator said she’s appreciated Cardi saying some nice things about her in a few recent interviews. However, Nicki is still working through issues she has with Quavo, one-third of rap trio Migos, because he didn’t stick up for her during the melee.

“With ‘MotorSport’ I kinda felt ambushed,” she stated. “I love Quavo, and at the time on Twitter I explained how ‘MotorSport’ came about and you know, people were saying that I was lying. So I texted Quavo and I said, ‘Hey, just, you know, could you back me up on this because I don’t want people to think I’m lying? What do I have to lie about?”

“And he didn’t back me up,” she continued. “He texted me, and he was like ‘I would go on Twitter and back you up if you were my girl. Lol.’ And that hurt, because he’s somebody, I love him … It hurt my feelings that people would watch me be slaughtered and not one person will step in to say the truth.”

Cardi nor Quavo have responded to Nicki’s interview.