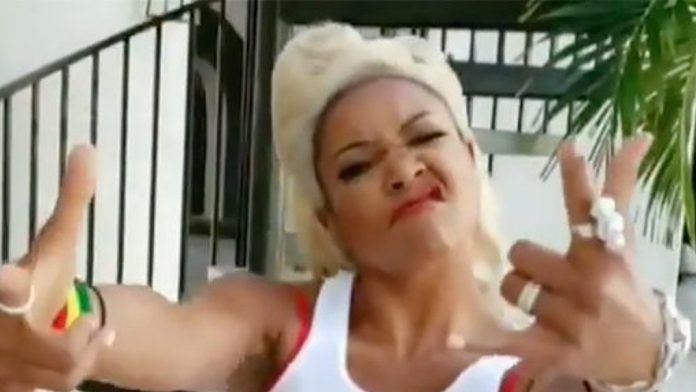 This year, Gabrielle Union decided to throw herself into the Halloween spirit and dress up as pop-rock-ska songstress, Gwen Stefani. Now, while Stefani herself loved the tribute, several Twitter users nearly lost their ever loving minds.

Over the weekend, to celebrate both the holiday and her 46th birthday, the actress transformed herself into Stefani during her heyday as the lead singer of the group, No Doubt. She even shot a cute clip of her rocking out to the band’s classic hit, “Just A Girl.’

When Union tagged Stefani on Instagram and Stefani responded with: “@gabunion obviously this made me soooooo happy!! Gx”

Despite the mutual admiration shared by the two women, some racists on Twitter tried to call up the ghost of “reverse racism” (a term many have explained ad nauseam isn’t a real thing) and complained that it’s unfair that Today host Megyn Kelly was ousted from her daytime talk show while Union’s costume was clearly an example of what they are calling “whiteface.”

The fact that the Being Mary Jane star wore no complexion altering make up and merely slapped on an outfit and a wig, somehow seemed to be lost on these people as they vehemently cried foul.

“So didn’t Megan Kelly just get fired for saying black face and white face were okay if you were dressing up as a person?” asked one confused poster.

“So it’s ok for Gabrielle Union to dress as Gwen Stefani a white girl? But it’s not ok for Meghan Kelly to dress as Diana Ross?” a proud MAGA supporter wrote, tagging GMA’s Twitter account directly. “Can I just say double standard and pure racism towards Meghan Kelly?”

Some brave souls responded to these complaints and tried to explain the nuances and historical ramifications of blackface.

“Did you not listen to the context of why Meghan Kelly got canned and why Gabby paying tribute to Gwen in this fashion is SO far different?” responded one follower.

But these appeals seemed to fall on deaf ears as the heated debates continued in comments sections all over social media.