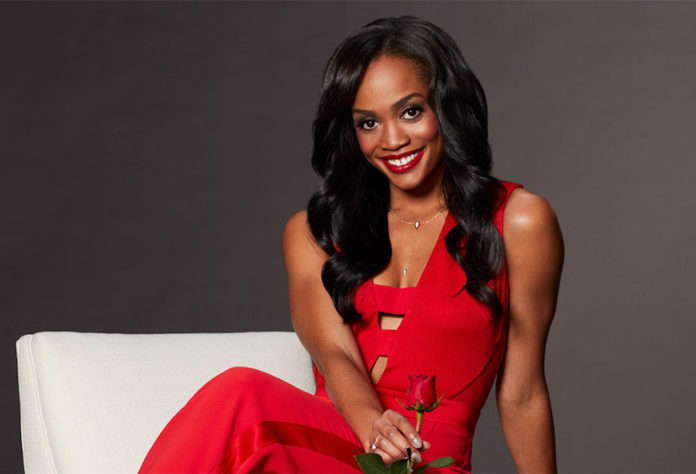 We didn’t even have to wait to watch beautiful Texas attorney Rachel Lindsay have her heart broken before finding out that she would have another shot at love. And while we certainly support any woman who gets a second chance at finding Mr. Right, we were even more elated that Bachelor Nation, after years of largely lily white bachelors and bachelorettes, would finally welcome its first African-American lead. For those who suffered through Nick Viall’s season, we saw something special in Rachel. Poised, stunning and utterly normal, Rachel found her way into millions of hearts and ultimately into the highly-coveted bachelorette slot.

Last night, the first episode of Rachel’s season-long quest to find love kicked off in a two-hour extravaganza of hot men, strange behavior and intriguing storylines on ABC. While any fans of The Bachelor franchise know what night one typically entails — a plethora of men who sacrifice most of their dignity in awkward first encounters with the bachelorette — all eyes were glued on Rachel and how producers would treat their first Black bachelorette. Admittedly it’s early and there’s still plenty of time for fumbled discussions of race and uncomfortable attempts at “understanding where Rachel comes from,” but episode 1 provided glimmers of hope that this season would truly be more progressive and more reflective of what our country is today from a demographic standpoint.

There is no denying that Rachel must have been the unicorn show producers were looking for. Successful, likeable, attractive and largely non-threatening to die-hard fans of the franchise, Rachel provided a perfect intersection of diversity and familiarity. She was a means of keeping white audiences engaged (as they were familiar with her and loved her from Nick’s season), while attracting minority fans who had often times been frustrated and disillusioned by the show’s very clear lack of diversity. But, thankfully, Rachel doesn’t appear to simply be a puppet for producers. She is a smart, no-nonsense woman who — even from her first moments — has a clear objective of what she is looking for from the show and doesn’t strike us as afraid in sharing her opinion. Her banter with the men who have joined her in the mansion is fun, but with a smart, witty edge that serves up proof positive she isn’t just a pretty face or an empty attempt at shaking things up in Bachelor Nation for a ratings boost. She is a proud Black woman who we’re confident will do all of us proud throughout her time on the show.

While, again, there are still plenty of episodes to go at which we’ll become better acquainted with the eccentricities and poor behavior of some of the men (It’s The Bachelorette, of course there are going to be some strange ones in the bunch), night one only left us with a few select losers Rachel would be better off without. What struck us most was the variety of men who were brought into the fold. It comes as little surprise that producers would cast a wider net than they had in previous seasons given they were selecting suitors for their first Black Bachelorette, but that didn’t make the sight of so many men of color any less heart-warming. Finally we’re looking at a cast that isn’t cut from the same blonde-haired, blue-eyed cloth. We’re looking at dark-skinned, caramel-skinned, light-skinned — a rainbow of men that truly showed beauty and sexy come in all colors. There are a few men who instantly grabbed our attention (Josiah, Fred, Bryan and Peter, we’re looking at you) and some who definitely made us re-think being straight women (Lucas and his “Waboom”). But by and large, it looks like ABC is doing right by our girl so far.
One of the biggest topics we were interested in seeing was how producers and the network would handle Rachel’s race. Were they going to instantly go there in episode 1, making her being a Black woman a central point in her quest to find love or where they going to treat her like every other Bachelorette before her? Thankfully, they opted for the latter. That’s not to say that we don’t want the fact that Rachel has broken barriers to be celebrated or that she shouldn’t fully embrace what it means to Black within The Bachelor Universe. But what we were pleased to see happen in the season premiere was that Rachel was treated the same way other women in her position had been treated over the past several seasons. She’s not the “Black Bachelorette,” she’s “The Bachelorette.” There is no denying that racial and identity politics will play a considerable role as the season progresses (we caught a few glimmers of it in the preview trailer at the end of the episode). There, of course, will be the moment in which the “have you ever brought a Black girl home before” situation arises. But we hope that each of these teachable moments are dealt with in a realistic, non-exploitative way. We have all the confidence in the world in Rachel; we just hope show producers are equally as impressive, insightful and thoughtful as she will be.
And last, but certainly not least, one other issue that’s bound to rear its head at some point this season will be criticism wielded against Rachel for who she decides to love. There’s no doubt that she’s in a bit of a damned if you do, damned if you don’t situation: White audiences may not be as engaged if they are watching a Black love moment, while if Rachel chooses a white man, she may attract the ire of African-American audiences. But what I sincerely hope we can all keep in mind is that she is simply a woman looking for love. While we can dismiss this entire show as just another bit of ridiculous, over-hyped reality drama, Rachel’s very position on the show signals much needed diversity in primetime television on a major network. Sure we’ve seen “Empire” and “Black-ish” and other shows featuring minority casts take off into the mainstream, but the reality television colossal that is the Bachelor/Bachelorette had always dodged the diversity bullet. Thanks to Rachel, regardless of who she picks in the end, this season can only have a positive impact.