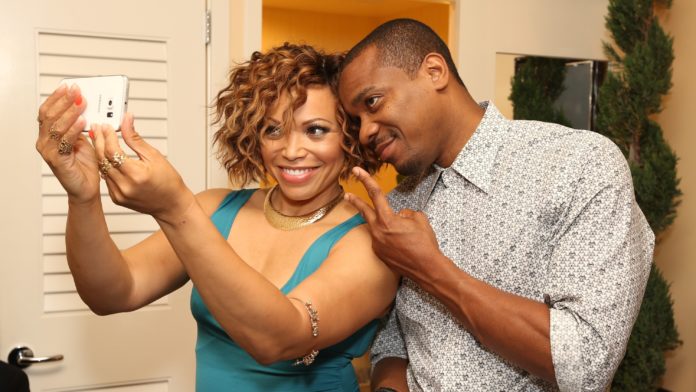 One of our favorite Hollywood couples is calling it quits.

Tisha Campbell-Martin shocked fans when she released a public statement declaring that she has filed for divorce from husband Duane Martin, according to People. In a statement released by her representatives, she came to the decision that after 20-plus-years of marriage she had decided to move on.

“After 27 years of being together and two amazing children, it pains me to announce that I’ve filed for divorce,” Campbell-Martin said in the statement. “It’s an emotional time and I graciously ask for privacy for me, our children and the rest of our family,” it reads.

Most recently, Tisha and Duane have reportedly been steeped in troublesome financial issues. The two reportedly filed for bankruptcy in 2016, claiming $15 million in debt.

Tisha Campbell-Martin seems to be focused on moving her life in a lot of new directions.

She’s recharged her music career by releasing a new song, “I Don’t Wanna Be Alone” featuring Rich The Kid.

“Been singing since I was three years old and music has always been my first love,” Campbell-Martin told XXL.

A few weeks ago, Martin Lawrence, Campbell-Martin, and Tichina Arnold were all smiles in Burbank, CA as they dished about the possibility of a Martin reboot.

Fans consider the series a classic. References to scenes and lines from the show are still a part of Black popular culture. In the video clip where TMZ caught up with the three stars, Campbell-Martin was even wearing a sweatshirt that said “That ain’t no damn puppy,” a nod to a line from a hilarious episode that every die-hard Martin fan remembers.

Filmed outside of a steakhouse, the three actors played coy at first when a TMZ producer asked if a reboot was in the works. Lawrence threw up his hands and said “Never say never,” as the trio traded knowing grins.

Arnold avoided the question, but mentioned new beginnings. Campbell-Martin was a little more blunt, talking directly into the camera and saying “We can’t tell y’all shit.”