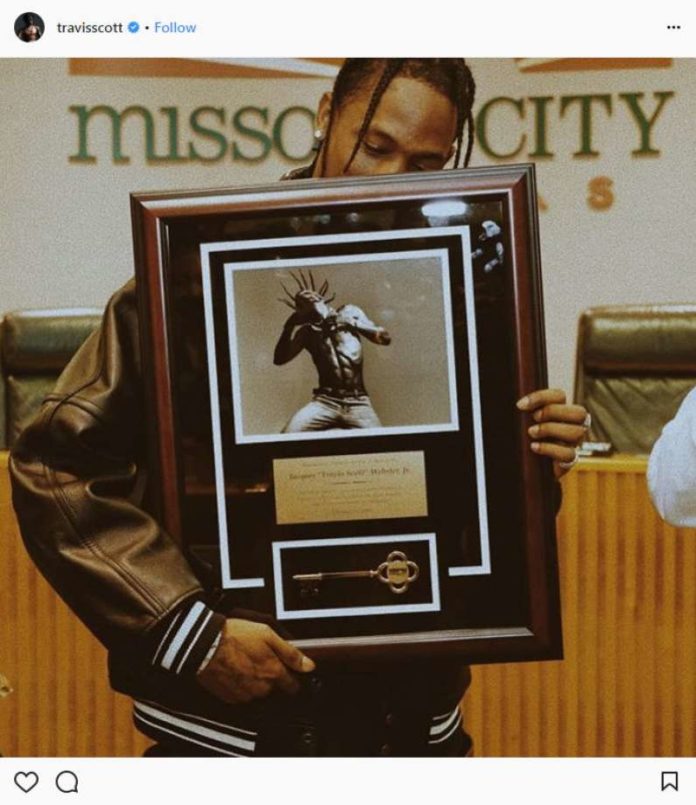 The mayor of Missouri City, Allen Owen, recently gave rapper Travis Scott the key to the city as well as declaring the date, Feb. 10, as Travis Scott Day in the Houston-area suburb.

Scott, who grew up in the city’s subdivision of Meadowcreek, attended the ceremony with a few of his family members and Houston Rockets star James Harden, though Scott’s girlfriend Kylie Jenner was missing from the event. The couple just welcomed a baby girl on Feb. 1, so that’s likely why Jenner was missing.

The key ceremony was part of the 4th Annual Black History Month Celebration of Culture & Music. After getting the token, Scott gave a short speech to the crowd that gathered in the city’s community center.

“We ran the streets up and down Highway 6 and Cartwright,” he said in the beginning of his speech. “We tried not to speed because – you know – you get pulled over, it’s over.”

He continued to say his thanks after receiving his first award from the city of his hometown.

“This is everything I fight for, everything I cry about and every night – I stay up countless nights in the studio – just for a moment like this, so I’m very proud,” he said during his speech.

During the day’s celebration, the rapper gave a performance to his fans at the city’s community center. He performed his 2017 hit “Butterfly Effect.” Partway through, he had to tell the crowd to chill and step back from the stage.