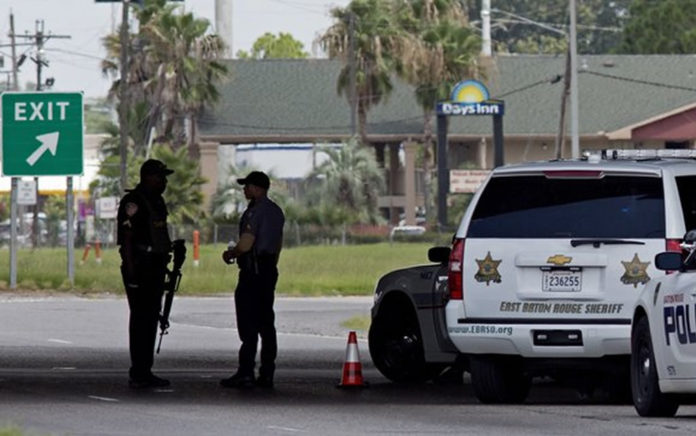 Three Baton Rouge, Louisiana, officers were killed and another three were injured Sunday while responding to a shooting in the city, less than two weeks after a local man was shot to death by police in a case that drew national attention.

East Baton Rouge Sheriff Sid Gautreaux, speaking at an afternoon press conference, said a gunman responsible for the killings was fatally shot by responding officers within minutes of the first 911 calls just before 9 a.m.

CBS News identified the shooter as Gavin Eugene Long of Kansas City, Missouri, and noted that he appeared to have carried out the shooting on his 29th birthday.

“There is not an active shooter scenario in Baton Rouge,” State Police Col. Mike Edmonson announced at the press conference.

Two of the dead were identified as Baton Rouge police officers, and one is an East Baton Rouge Parish sheriff’s deputy. Another sheriff’s deputy, 41, is said to be in critical condition. Two other officers suffered wounds that were not life-threatening.

“To me, this is not so much about gun control as it is about what’s in men’s hearts, and until we come together as a nation, as a people, to heal as a people, if we don’t do that and this madness continues, we will surely perish as a people,” Gautreaux said.

WAFB identified BRPD officers Montrell Jackson, 32, and Matthew Gerald, 41, as two of the slain officers. The station says the little boy seen in photos with Jackson is his son.

According to Marine Corps records, Long had a conventional tour in the Marines. He served for five years and retired as a sergeant in August 2010 with an honorable discharge. During that time, he was trained as a data network specialist and attended the Marine School of Infantry, indicating that he received infantry training. He also served as a communications specialist in Iraq from June 2008 to January 2009 and served in Okinawa with the 3rd Marine Air Wing. Nothing in the records indicates any disciplinary actions against him.

Authorities earlier reported that they were searching for two suspects wanted for the attacks. They declined to take questions at the press conference but asked the public to stay away from the area.

A police spokesman, speaking to The Associated Press, has since said that two “persons of interest” have been detained near Baton Rouge.

Multiple outlets previously reported that the Addis Police Department, about 10 miles away, had detained two men in possible connection to the shootings. The men were reportedly seen entering a Walmart store dressed entirely in black, WAFB reported. When they exited, they were wearing a change of clothes. A request for comment from Addis Police was not immediately returned.

In a press conference Sunday afternoon, President Barack Obama urged unity among racial and political groups in light of the recent police shootings.

“Five days ago I traveled to Dallas for a memorial service of the officers that were slain there,” he said. “I said that that killer would not be the last person who tries to make us turn on each other, nor will today’s killer. It remains up to us to make sure that they fail. That decision is all of ours. The decision to make sure our best selves are reflected across America, not our worst.”

Earlier Sunday, Obama offered his full support to local, state and federal agencies in a statement, while calling the attacks “the work of cowards who speak for no one.”

Just before 9 a.m., a call came in to police about a man walking around with an assault weapon, The Advocate reported.

Witness Brady Vancel told WAFB that he saw two people shooting at each other before authorities even arrived.

“There was multiple gunshots going back and forth and back and forth before any police ever showed up. This was not a come-at-police situation,” Vancel said. “They weren’t targeting police at first, I don’t assume so, because these were men out here shooting at each other in an empty parking lot until the police showed and then it turned into a gun battle, I’m guessing to try to get themselves free or get out of the situation.”

Hours after the bloodshed, the scene remained cordoned off from the public, with officers turning away reporters.

Attempts to reach police for comment were not immediately successful.

The shooting took place about 5 miles from where Alton Sterling was shot to death by local police on July 5.

His death sparked protests and nationwide outrage after video showed Sterling, who was black, being overtaken by two officers before shots were fired. Cell phone video also emerged appearing to show that Sterling was not holding a gun at the time he was shot.

In the aftermath of Sterling’s death, Jackson wrote on Facebook of the difficulties he faced patrolling the city, The New York Times reported.

“I swear to God I love this city but I wonder if this city loves me. In uniform I get nasty hateful looks and out of uniform some consider me a threat,” he wrote, according to the outlet.

“This city MUST and WILL get better,” he continued. “I’m working in these streets so any protesters, officers, friends, family or whoever, if you see me and need a hug or want to say a prayer. I got you.”

Sunday’s shooting follows police deaths in Dallas less than two weeks ago. Lone gunman Micah Xavier Johnson, a 25-year-old Army veteran, shot and killed five police officers and injured seven others as a Black Lives Matter protest was winding down. He had no association with the group.

After officers tried negotiating with Johnson for several hours, they exchanged gunfire and ultimately killed him by detonating an explosive strapped to a robot bomb-detector.