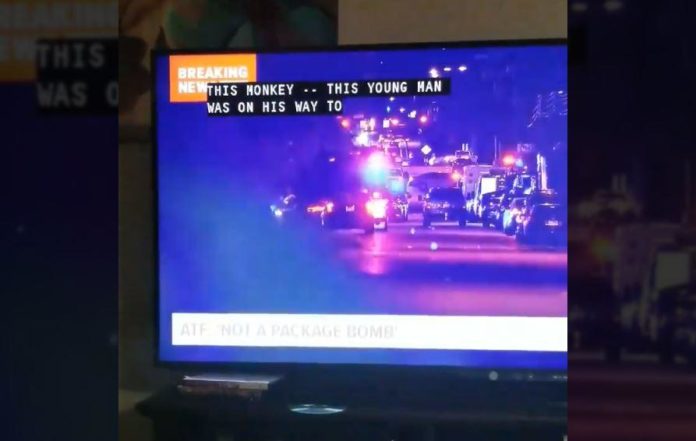 An ABC affiliate station in Austin, Texas, severed ties with a closed-captioning company after a “typographical error” labeled an African-American bombing victim “this monkey.”

KVUE-TV issued an apology after a Tuesday evening story aired on the station about victims of Mark Anthony Conditt’s deadly 19-day bombing spree in Texas. While the anchor was discussing the death of 17-year-old Draylen Mason, the words “this monkey” appeared on the TV screens using closed captioning.

Immediately following, the words “this young man” flashed up after two dashes and an apparent correction reflecting the actual phrase spoken by the anchor.

The text just prior to the “this monkey” phrase also misspelled the victim’s name, identifying him as “17-year-old Jaelyn Mason. An honor student. An incredibly gifted musician.”

KVUE-TV said a third-party closed captioning company called VITAC was responsible for the “terrible error.” The station has “demanded an explanation and an apology to Draylen’s family, and VITAC is complying.”

KVUE-TV said it waited until Thursday to sever ties with VITAC due to Federal Communications Commission guidelines that required several steps to be taken in replacing the closed-captioning contract.

Keep Up With This Story And More By Subscribing Now

“Many of our viewers have asked why this wasn’t an immediate decision, and we want you to know that we’ve been working as fast as possible to secure a replacement to this service while adhering to FCC guidelines,” the statement continued. “We’d like to thank our viewers for sharing feedback on how important this decision is to our community.”

Anthony Stephan House, 39, was also killed during a March 2 blast linked to Conditt’s bombing spree. Both victims were African-American.