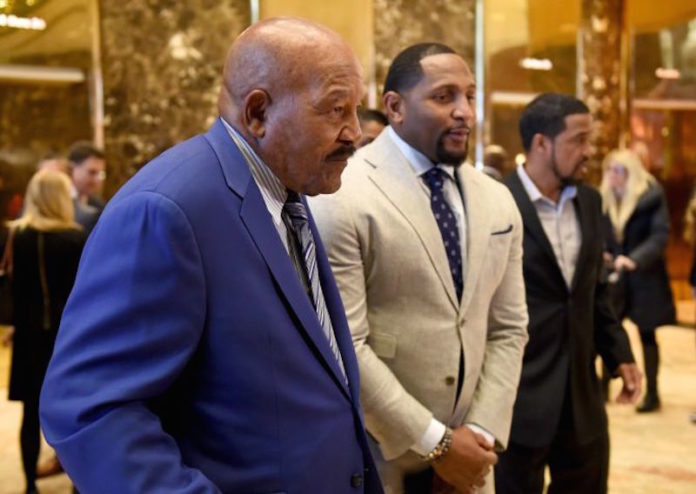 If President-elect Donald J. Trump contacted you for a meeting, would you take it? Is any and every black person who acquiesces to meeting with Trump a sellout? Would you be a coon, would I be an Uncle Tom, for giving Trump my time?

These questions have been floating around since a few of “the blacks” have had coffee chats at the Trump Tower. Last week, Kanye West, Ray Lewis and Jim Brown—that’s a rapper and two former NFL players—spoke with the Cheeto Manchurian Candidate about “urban neighborhoods.”

Swift criticism followed the meetings, and it was especially aimed at Mr. West, who the week prior had checked himself out of a hospital after reportedly having a mental breakdown. With Lewis and Brown, the criticism has been a bit softer, with black people considering whether they would take the opportunity to speak with Trump.

Many of the conversations I’ve peeked into have people agreeing that they would take the opportunity because if any president calls, you must be important. Others claimed that it would be a mistake not to take the opportunity to tell Trump about himself, his slights against the black community and his impending harm to our long-fought-for civil rights. Then there were those who believe that you have to honor all presidents, respect all who hold the highest office in our nation.

But let’s be honest here; the only reason any black person who does not currently work in policy or politics would take up the offer to meet our future president in Minute Maid would be for nothing more than parading their hauteur as altruism.

Trump only moves in vaingloriousness; he refutes political precedent in favor of rallies where he boasts about convincing “the blacks” to apathetically not vote. He passes on foreign policy briefings but has time to take a quick meeting with a retired football player, because Ray Lewis has some crucial insight to offer on our livelihood that usurps keeping abreast of the foreign diplomacy of the current world power that Trump is set to lead in the next month?

Do we believe that Trump is actually listening, receiving or even paying attention in these meetings where the photo op is longer than the actual conversation?

Trump released his “New Deal” plan for the African-American community to MediaTakeOut, a site known for its false news, urban gossip and clickbait headlines. The belief that Trump reaches out to you validates your importance; similarly, his reaching out then elevates a witless gossip website to the ranks of a verified news source. Because Trump saw it as the news source for black Americans, MTO must be of importance.

The oafishness in believing that all presidents should be respected and honored, regardless of merit, negates the history of our ancestors who martyred themselves to hold our presidents’ feet to the fire in fighting for our right to the most basic of human rights.

There are circumstances in which a Trump meeting might elicit a more positive response. That politicians seek to vocally challenge him, whether in person or from the Senate or House floor, is necessary. Leadership of federal agencies, community organizers and policy advocates, whoever takes the opportunity, should not be able to walk out of the room assuaging the criticism of Trump—especially his backing of white nationalists—without us seeing them take explicit action, simply because they got face time with the president-elect.

For most laymen, a meeting with Trump would be a spectacle of self-promotion. Trump gets a picture, a few boastful tweets, and then you go on tour to explain what happened in your meeting. Your name is in the press, your image is splashed across media, you’re now on the news. If you are savvy enough, you can stretch that 15 seconds into something bigger. You would not be the first to build a career off self-importance.

Isn’t that how Trump ended up becoming president anyways?