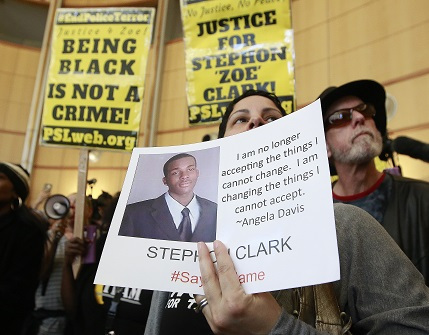 The California attorney general’s office on Tuesday joined an investigation into the fatal shooting of an unarmed black man by Sacramento police to provide independent oversight.

“Due to the nature of this investigation, the extremely high emotions, anger and hurt in our city, I felt it was the best interest of our entire community including the members of our police department to ask the attorney general to be an independent part of this investigation,” Hahn said.

Clark was killed by two Sacramento police officers who were responding to a report of someone breaking car windows in a South Sacramento neighborhood. Police thought Clark was holding a gun, but he was found only with a cellphone.

Attorney General Xavier Becerra’s office will provide oversight of the investigation and conduct a review of the police department’s policies and training around use of force. Body camera footage released by the department shows police firing 20 rounds at Clark.

His grandmother, Sequita Thompson, called Monday for the police to change how they apply force in such situations and to consider non-lethal options.

Hahn and a number of community leaders called for calm and peaceful protest as the city moves forward.

Community members and activists have engaged in marches, including one that blocked the highway during rush hour and the entrance to a Sacramento Kings game.

“The country is watching us,” he said. “Let us show how a city in pain together, with all of our partners, can in fact achieve a better way.”