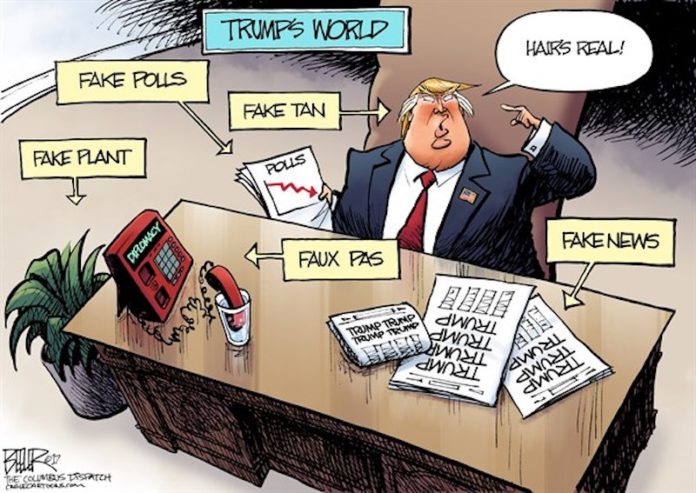 In 1955, Jet Magazine and the Chicago Defender published photographs of Emmett Till’s mutilated corpse, igniting international interest in the American Civil Rights Movement. Defender reporter Mattie Colin, who covered the return of the teenager’s body to Chicago, captured his mother’s anguish in her poignant articles, one of which read:

“Oh, God, Oh God, my only boy,” Mrs. Mamie (Till) Bradley wailed as five men lifted a soiled paper-wrapped bundle from a brown, wooden mid-Victorian box at the Illinois Central Station in Chicago Friday and put it into a waiting hearse. The bundle was the bruised and bullet-ridden body of little 14-year-old Emmett L. Till of Chicago, who had been lynched down in Money, Mississippi.

For many in the north, the brutality of the Jim Crow-era South was an abstract and distant concept. Reporters like Mamie Colin made it horrifyingly real. And no one dared demean it by calling it “fake news.”

Friction between the White House and the journalists tasked with holding officials to account is part of a healthy democracy.  But recent concerted efforts to delegitimize the news media are destructive and demoralizing.

Among the low points of the recent presidential campaign were the vicious attacks on individual reporters which were a regular part of some rallies. White House press conferences, which should be a source of lively give-and-take, have devolved into ad hominem attacks.

“The Civil Rights Movement would have been like a bird without wings if it hadn’t been for the news media,” Rep. John Lewis has said.

Newspapers and the newly-popular medium of television brought into American homes disturbing scenes of activists in Birmingham and Selma being attacked by with dogs and fire hoses, beaten and tear-gassed by state troopers and sheriff’s deputies. A photograph of Selma activist Amelia Boynton, beaten unconscious, ran on the front page of newspapers and news magazines around the world.

Among the martyrs of the Civil Rights Movement is Paul Guihard, a reporter for a French news service, who was shot to death in 1962 during protests over the admission of James Meredith to the University of Mississippi. Newspaper offices were the targets of shootings and bombing attempts.

The men and women of the Fourth Estate continue to risk their lives in the performance of their duties. In the last quarter century, at least seven journalists have been killed in the line of duty in the United States, four of them murdered.

One of the first important American journalists to face death threats for her reporting was Ida B. Wells, a trailblazing African-American woman who documented the savage practice of lynching in the 1890s.

The work of America’s journalists has resulted in some of our nation’s most important reforms. Upton Sinclair’s expose of unsanitary practices in meatpacking led to the passage of the Pure Food and Drug Act and Federal Meat Inspection Act. Seymore Hersh exposed the My Lai massacre and the Army’s subsequent cover-up.

Bob Woodward and Carl Bernstein’s Watergate reporting led to the indictments of 40 Nixon Administration officials and the eventual resignation of President Nixon. The Washington Post’s publication of Florence Graves’ investigation into sexual misconduct on Capitol Hill led to the passage of the Congressional Accountability Act.

Even the staunchest defenders of freedom of the press were not always happy with its results. As a delegate to the Continental Congress, Thomas Jefferson wrote, “Were it left to me to decide whether we should have a government without newspapers or newspapers without a government, I should not hesitate a moment to prefer the latter.”

As president, Jefferson blasted the press. But he never changed his position: “It is, however, an evil for which there is no remedy; our liberty depends on the freedom of the press and that cannot be limited without being lost.”

Mark Morial is president and CEO of the National Urban League, a lawyer and former mayor of New Orleans.