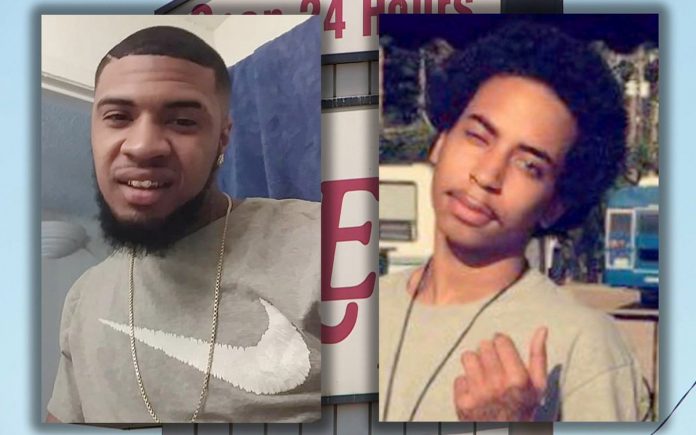 n case you didn’t know, a lynching is not a hanging. As this Tennessee State Museum site states, “Lynching is the unlawful killing of a person, usually by hanging. Sometimes the victim was tortured— beaten or mutilated” and “the lynching might be done by a few or there might be a large group of people.”

Emmett Till was not hung, according to Biography.com, two white men “beat the teenager brutally, dragged him to the bank of the Tallahatchie River, shot him in the head, tied him with barbed wire to a large metal fan and shoved his mutilated body into the water.” Here is what happened to Ramon Smith and Jarron Moreland, both 21, in Oklahoma. On April 14, Four white people killed the two men by shooting them, dismembering their bodies and tying cinder blocks to their bodies so they would sink in a pond. Let’s not be so blind to act as if  there was no racial element. Until proven otherwise, this is a lynching.

Just like Trayvon Martin was lynched, even though his killer said it had “nothing” to do with race.  Just like Timothy Caughman was lynched in March of 2017 in New York—though a name you likely never heard, prosecutors said it was “most likely an act of terrorism.” Ramon and Jarron were lynched.

According to the criminals, they shot, dismembered and sunk the bodies into a pond simply because during a gun sale they heard the sound of a gun being cocked. Johnny Shane Barker, 16, started shooting. Sounds implausible that they would instantly  shoot and kill two people because of the sound of a gun being cocked, which many people do to test out a gun. In addition, why the brutality of dismembering their bodies and throwing them in a pond with cider blocks? Why not call the police and explain their “life was threatened,” we all know how that worked for George Zimmerman? The story from these criminals is illogical. But it sounds as if authorities are quickly believing this version.

Cleveland County prosecutor Greg Mashburn said he does not plan to seek additional charges related to race because “the evidence absolutely shows that this was not racially motivated.” Of course, authorities also originally thought that the killing of Devonte Hart and his five siblings was not “intentional.”  The New York Post reports Mashburn “declined further comment.”

His grandmother said to reporters about Jarron, who was a father, “Very, very good daddy. He took care of his little boy and the boy is going to be lost without his daddy.” Jarron Moreland’s mother Kennetha Moreland told KFOR she wonders whether more happened than a gun sale gone bad and added, “To me, it’s like y’all planned to torture them.”  Exactly “more happened” — a modern day lynching, as Shaun King tweeted.