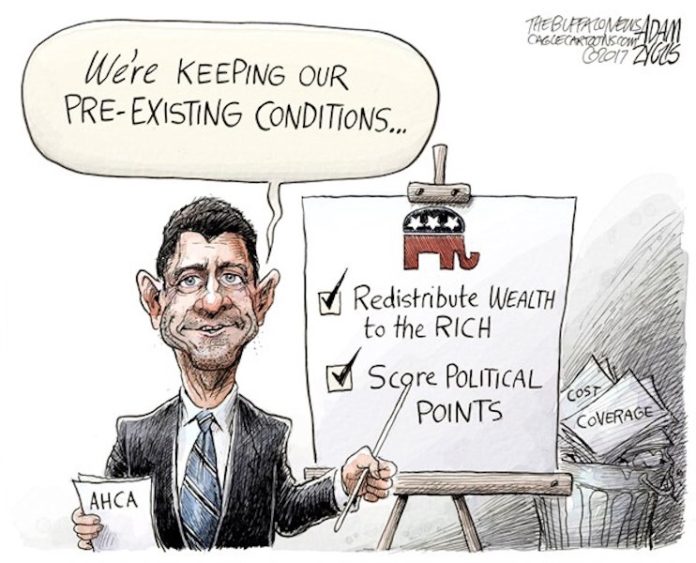 The Children’s Defense Fund has made giving every child a healthy start a core part of our mission for all of our 44 years. We are extremely concerned that the American Health Care Act under consideration by Congress right now would undo more than 50 years of progress made expanding comprehensive child-appropriate health coverage to tens of millions of children.

Today, thanks to the Affordable Care Act (ACA or Obamacare), Medicaid and the Children’s Health insurance Program (CHIP), 95 percent of children in America have health coverage – a historic high.

But now the American Health Care Act is snatching away what is a basic human right and threatens all this at a time when our children need us to continue to move forward, not backwards. As the bill moves closer to a vote by the full House of Representatives, we are urging Congress to “vote NO.”

This would end Medicaid’s guarantee of affordable, comprehensive health coverage for poor and low-income children and children with disabilities and other special health care needs.

The new Medicaid per capita cap would limit access to health coverage for children but not reduce their health needs or costs of care. Over time, it would shift costs from the federal government to states, counties, local communities, providers and beneficiaries. State and local governments would have to cut eligibility, services or both to continue to provide comparable care to the 37 million children currently enrolled in Medicaid.

Children are nearly half of Medicaid recipients and any changes to Medicaid would have a disproportionate impact on the quality comprehensive child specific health and mental health services and treatment children currently receive and need.

The Republican American Health Care Act will end the ACA’s Medicaid expansion over time, despite the fact that 31 states and the District of Columbia have extended Medicaid coverage to 26 million low-income parents and other adults. The ACA’s targeted subsidies would be replaced with less affordable tax credits and parents will end up having to pay more for less comprehensive coverage – or go uninsured altogether.

Research clearly shows children are better off when their parents have health insurance coverage. When parents get treatment for their own health and mental health problems, it strengthens children’s developmental outcomes.

Children with disabilities who have Individualized Education Plans (IEPs) that call for special services to be delivered in the schools or children with abuse histories or disabilities that require treatment in foster homes or residential treatment will be at special risk.

Changes proposed to both the ACA and Medicaid would limit coverage of these treatments.

CDF calls on Congress to protect children’s current health coverage as it considers the American Health Care Act and vote NO unless significant changes are made to ensure the “do no harm” standard, a core tenet of medical treatment, is followed.

The American Health Care Act would reverse progress and make many millions of children worse off by depriving them of the comprehensive and affordable child-appropriate coverage they are guaranteed today, jeopardizing their futures and also the nation’s future economic and national security.

Children who cannot see or hear the teacher, have undiagnosed attention deficit disorders, or are suffering from depression and other mental health disorders are less likely to learn in school. Congress and the Administration should continue to make it easier – not harder – for children to get the critical supports they need to survive, thrive and contribute to our nation.