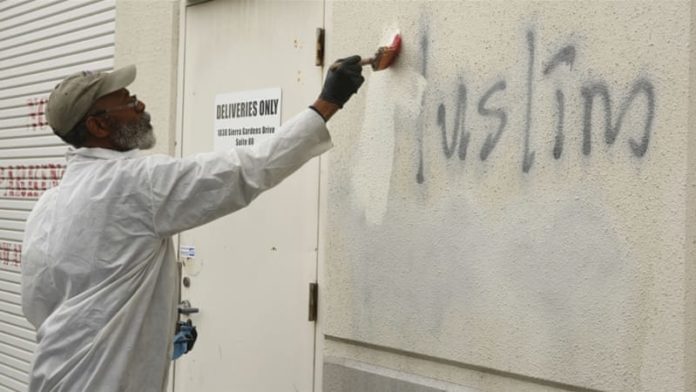 Hate crimes across the U.S. rose nearly 5 percent in 2016, according to the FBI’s annual tally, marking the first time in over 10 years that the country has experienced consecutive annual increases in crimes motivated by bias against race, religion, sexuality, national origin or disability.

The FBI’s annual hate crimes report, published Monday, counted 6,121 hate crime incidents in America last year, up from 5,850 such incidents in 2015, a rise of 4.6 percent.

The much-anticipated FBI report is the most comprehensive hate crime data available for the divisive 2016 election year, and backs up earlier evidence of rising hate in America. The Southern Poverty Law Center documented a wave of hate incidents in the months following the November 2016 election.

“We now have an unbroken streak of presidential election year increases [in hate crimes] going back to 1992, around the time national data collection commenced,” said Brian Levin, a professor at the Center for the Study of Hate and Extremism at California State University, San Bernardino.

Corey Saylor, spokesman for the Council on American-Islamic Relations, told HuffPost that “we cannot see such data and forget the humans whose lives were changed by an act of hate.”

“Americans have to act to ensure that these hate crimes numbers go down by standing up to fear mongers,” he said.

“It’s deeply disturbing to see hate crimes increase for the second year in a row,” Jonathan A. Greenblatt, CEO of the Anti-Defamation League, said in a statement. “Hate crimes demand priority attention because of their special impact. They not only hurt one victim, but they also intimidate and isolate a victim’s whole community and weaken the bonds of our society.”

The FBI’s annual hate crime statistics, while the best measurement of hate in America, are deeply flawed. That’s because the FBI relies on local and state police departments to voluntarily report their hate crime numbers to the FBI, which over 3,000 law enforcement agencies don’t bother to do on a yearly basis.

In 2015, of the agencies that did report hate crimes to the FBI, 88 percent reported zero. Moreover, federal law enforcement agencies like Customs and Border Protection and the Drug Enforcement Administration often fail to send their own hate crime statistics to the FBI, even though they are required to do so by law.

A national survey by the U.S. Bureau of Justice Statistics found that over half of hate crime victims don’t report incidents to authorities at all. There were a staggering 250,000 hate crimes each year in the U.S. between 2003 and 2015, according to the survey.

“If law enforcement agencies fail to document the true extent of hate crimes against our communities, our nation will have a hard time mobilizing the political will and resources necessary to prevent and combat the problem,” Singh said.