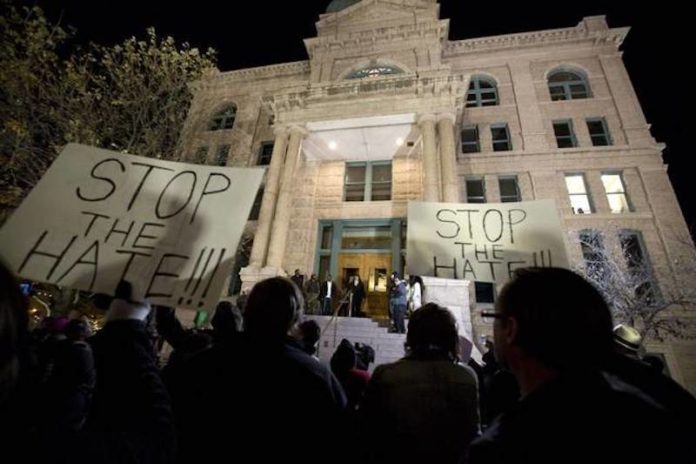 Protesters gathered in downtown Fort Worth on Thursday night in response to the now viral video of a Ft. Worth police officer manhandling a woman and her two daughters who called for help when her son was assaulted.

As previously reported on The Root, Jacqueline Craig, a 46-year-old black woman, called police after her son reported being choked by a white neighbor. The call was answered by a white, as yet unidentified police officer, and the exchange was captured on video.

After the police officer has what appears to be a quiet exchange with the attacker, he strolls over to Craig, and asks condescendingly, “What’s going on with you?”

Craig tells him that the neighbor choked her son for reportedly throwing a piece of paper on the ground and not picking it up when the neighbor asked him to.

In response to Craig’s distress, the police officer asks in an accusing tone, “Why don’t you teach your son not to litter?”

“He can’t prove to me that he did or didn’t, but it doesn’t matter,” Craig says. “That doesn’t give him the right to put his hands on him.”

To which the officer responds, “Why not?”

Dallas News reports that a crowd of about 150 people gathered at Tarrant County Courthouse at 7 p.m. on Thursday.

“It’s time to stand up and protect your community,” LaShadion Anthony said. “If you came out here for a kumbaya, you came to the wrong place.”

“When we call the Fort Worth PD, we want help. Not to be arrested,” Ford-Turner said. “She called him to help. And he questioned her.”

Activist Dominique Alexander of the Next Generation Action Network called on Fort Worth Police Department’s  leadership to “do the right thing.”

“If you do not serve the diversity of this community, you’ve got to go,” Alexander said.

Dallas News reports that the crowd got heated when eight Fort Worth officers showed up on bicycles, but organizers were able to calm the crowd.

Kim Cole, an attorney with the Next Generation Action Network told the group that they needed to hold officers accountable, but they would be unable to do so if the activists were divided.

“Let your exasperation be your motivation,” she said. “We can make a difference — but only if we stand together.”

Speakers addressed the crowd until about 8:30 p.m., when demonstrators started to break away, Dallas News reports.

Activist Cory Hughes said, “We know that if it had been a black man grabbing a white boy that he would be locked up right now.”

How very true. And if it had been a black officer who antagonized and arrested a white mother and her two teenage daughters after they called for help, you wouldn’t even be reading this article right now.