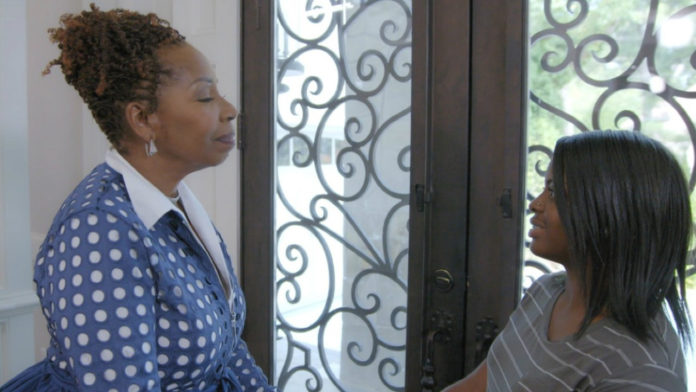 Fans of Iyanla: Fix My Life recently saw the famed author and life coach enthralled in the biggest on-camera blowup we’ve seen since she worked with DMX in 2013. Iyanla Vanzant begins season 5 of her OWN TV show attempting to help Kamiyah Mobley, the young woman who was kidnapped from a Florida hospital as a newborn and raised by her abductor until she was found by authorities in January of 2017 at 18 year’s old.

In clips for this next season of Fix My Life, we see Kamiyah yell, curse at, and even threaten Iyanla in a fit of rage as she attempts to help her work through her anger and feelings of abandonment. And while the interactions are hard to watch as a viewer, Iyanla said Kamiyah’s outbursts were to be expected.

“She was a baby,” the Fix My Life coach said in a phone interview. “She was 19 year’s old and I was very clear that there were one of two paths I could go –I’ve either got to break her heart or I’ve got to make her angry — in order for her to get in touch with what was going on, but the bottom line is she was just a pressure cooker.”

And for good reason, Iyanla added. “Imagine, you find out at 16 that the woman who raised you is not your mother — she abducted you — and now you hold that secret with her. Then, bang, she gets arrested and locked up. Then you meet your birth mother and your birth father who are basically telling you you’ve got to stay away from the woman that raised you. What do you do with that? Your mama ain’t your mama — what do you do with that?”

Unfortunately, what Kamiyah did was hold on to all of that misplaced anger because no one was helping her work through it. “Nobody, which is so common in the African American community, nobody is teaching this girl how to process her feelings, how to really speak to what she feels and what she’s going through,” Iyanla explained. “She’s not in therapy. Her whole world is blown up. I guess in one sense you should be glad you now know who your real mother and father are but you don’t know these people.”

To put it frankly, “She didn’t have the capacity to handle what was coming out so, like adults, the easiest thing to do is act out in anger,” Iyanla added. “Her father couldn’t contain her, nobody could contain her, and it wasn’t for me to force it. When she told me she was going to cut my heart out, I said, ‘Okay, let me just leave this alone. We’ve had enough.’”

As if the circumstances of her birth and childhood weren’t enough to work through on the show, Iyanla shared that Kamiyah had been dealt another blow just a week before the episode was taped.

“I was going to work with [Kamiyah] and her birth mother because her birth mother is very against her having a relationship with her abducted mother, but a week before the show the birth mother pulled out,” Iyanla said. “She wouldn’t do it so that left me with the father, who is overly compliant with her and just trying to keep her comfortable and make her happy, the stepmother and the boyfriend. So in addition to now her mommy who raised her being taken away, her birth mother kind of abandoned her so she was sitting in all of that.”

Most of us probably would’ve handled the situation similarly. But while there are lessons to be gained for viewers who are battling feelings of abandonment as well, Iyanla said the episode also serves as an example for those who are on the other side of the coin and want to help.

“If nothing else, I hope people will see that when someone is in breakdown and human and being upset screaming back at them is probably not the way to go.”