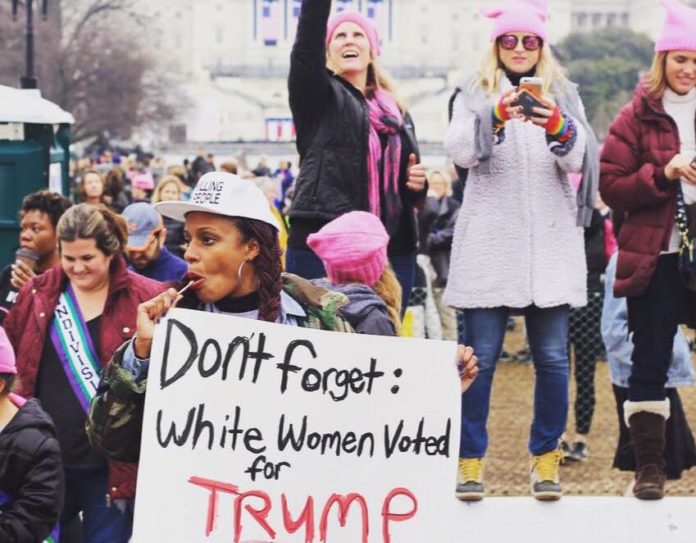 Millions turned out on Saturday for the Women’s March on Washington and its sister marches around the world. I wasn’t one of them.

It isn’t that I was against the core ideals of the march, or sided with those who thought it was just a bunch of feminist nonsense. I very much recognized the need for the united front against a new administration whose policies stand to infringe upon the rights of women, people of color, immigrants, the disabled and members of the LGBTQ community. And yet, I still had deeply complex feelings about how I, as a black immigrant woman, fit into the equation.

This was the most important sign at the #womensmarch. We have work to do. (via @eboneedavis)

From an office in NYC, I watched via live-stream as Janet Mock spoke out about the need for taking real action, and Janelle Monae created space for the Mothers of the Movement to chant their slain son’s names, and Angela Davis reminded us that “history cannot be deleted like web pages,” and I felt inspired.

I felt equally inspired to see white, Latino, Asian, indigenous, Muslim, undocumented, sexual assault survivors, queer, trans and disabled people take the stage to speak out about the importance of intersectionality and diversity. It may have looked like the very worst of SJW Tumblr to those against the march, but to me it looked beautiful. It looked like America.

There’s real work to do, but it won’t get done if we don’t, as a collective, support each other in all our struggles, not just the one’s that are trending.

And yet, at the same time, it didn’t feel good to see the numerous signs that centered feminism around having a vagina, harmfully excluding trans and nonconforming protestors. It didn’t feel good to know that just days before the march, Janet Mock had to call out the organizers for removing a line she’d contributed to the march manifesto about the need for recognizing the rights of sex workers. It didn’t feel good to see Madonna, a woman who never really apologized for publicly using the n-word, stand on the same stage as my heroes, joking cavalierly about blowing up the White House in a way that few women of color would ever dare to do.

Days before the protest, writer and activist Jamilah Lemieux announced that she’d be skipping the march for reasons that resonated with me on a deep level. For Color Lines, she wrote about being tired of black and brown women having to routinely put their own politics aside in the name of unity.

“I’d like to see a million White women march to the grave of Harriet Tubman, Sojourner Truth or Audre Lorde,” Lemieux wrote.

Even though Lemieux opted out of the march, there were many black women present who participated while also bravely calling out the same issues she wrote about. In one iconic photo that quickly went viral on social media, a black women held up a sign reading “Don’t forget: White women voted for TRUMP.”

Some people aren’t happy about the way women of color are expressing our mixed, sometimes negative feelings about this latest surge in feminist organizing. Ahead of the march, amidst controversy about dueling ideologies amongst organizers, writer Emma-Kate Symons complained about how the feminism she grew up with was being “reduced to a grab bag of competing victimhood narratives and individualist identities jostling for most oppressed status.”

“Can’t we rise above the sniping about ‘privilege,’ ‘white feminism,’ ‘intersectionality,’ and hierarchies of grievance in the face of Trump and the dangers he poses to the American and international liberal world order and women everywhere?” Symons wrote for Women in the World.

Black women are entitled to our anger and frustration. We’re entitled to call out white women even as we join them in protest. Change and revolution were never supposed to be easy, convenient, or comfortable.

It’s exactly reactions like that one that made me, and so many other black and brown women, feel torn about the Women’s March.

This isn’t the Oppression Olympics, but black women are entitled to our anger and frustration. We’re entitled to call out white women even as we join them in protest. Change and revolution were never supposed to be easy, convenient, or comfortable.

At the Washington march on Saturday, Gloria Steinem said, “If Trump creates a Muslim registry, we will all register as Muslims.”

That’s a beautiful sentiment, but it’s one that needs actual follow-through. If we’re not careful, the concept of “intersectionality” will go the way of “diversity,” becoming an empty and overused phrase by people who think saying it or talking about it is tantamount to actually integrating it into their lives. The march was an encouraging beginning, perhaps even a cathartic one. But there’s real work to do, but it won’t get done if we don’t, as a collective, support each other in all our struggles, not just the one’s that are trending.