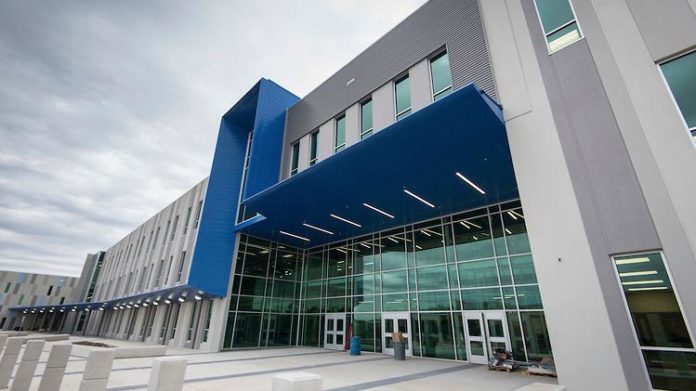 The $72 million dollar project was completed under a 2012 bond program. It’s the first new high school to be constructed in HISD in nearly 16 years.

Sterling has offered a special program in aviation sciences for decades, but the new school offers a number of new amenities and resources for students.

“We built a partnership with the Michigan Institute of Aviation Technology…so our students can get actual level one and two certificates in aviation maintenance. This stuff is all new to us,” said principal Justin Fuentes.

The program also allows students to get credits toward a pilot’s license.

“There are people who want to learn and get the pilot’s license because it’s a dream,” said senior Ronald Canales. “It’s a great opportunity because in college it would cost a lot. It’s free here, and it’s right across from my neighborhood.”

An observation deck now allows students to see planes coming and going from Hobby Airport while listening to the tower.

Fuentes said about 50% of the students enrolled in the aviation program go on to use their skills in the field after graduating.

“One thing I believe in education, we have to present options to kids. I always tell the kids, maybe this isn’t what you’re going to do, but you have a backup plan,” explained Fuentes.

According to Fuentes, 99.9% of students enrolled at Sterling are considered to be “high risk”.

He believes this new facility will help inspire kids to think about their futures.

The new Sterling at 11625 Martindale sits directly next to the old facility in southeast Houston.

The old school, which was built in 1965, is being leveled to create parking and new athletic fields.